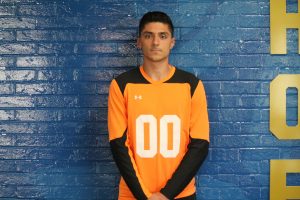 Anthony Bellomo of Salem, NH, has been selected for the Region 21 All-Regions Team.

Anthony Bellomo of Salem, NH, and Ethan Rousseau of Haverhill, who are members of the relaunched Northern Essex Community College men’s soccer team have been selected to the Region 21 All-Region teams as chosen and announced by the Region 21 men’s soccer committee. The Knights concluded the season with a 6-8-1 overall record and 4-4 record in Region 21 play, to mark the return of the sport to the college for the first time since the mid 1990’s.

Bellomo, a first team honoree was the regional leader in saves with 167 and was second in save percentage with a .852 mark. His save total also ranked 4th nationally. He played every minute in goal for the Knights over the course of the season as the team fell one game shy of a birth into the region 21 post-season tournament. 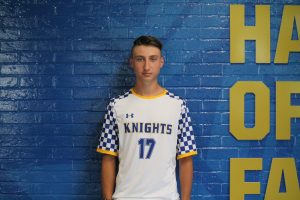 Ethan Rousseau of Haverhill was also named to the Region 21 All-Regions Soccer Team.

Rousseau, a second team selection anchored the team at the center midfield position. He started all 15 games on the season and finished with one goal and four assists, while also stepping back to help the back line on the defensive side of the ball when called upon.

Looking to build upon their first season successes, the Knights are looking forward to their spring training season and the 2020 campaign which is scheduled to open on September 3rd against Southern Maine Community College in Haverhill.