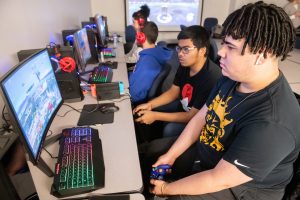 (Front to back) Muyi Valdez of Lawrence a general studies: health specialization major,  Chris Long of Haverhill a computer information sciences major, Edwin Guzman of Lawrence a biology major, and Christian Bova of  Lawrence and exploratory major, are members of the NECC Esports team. Here they are practicing in the new Esports lab on the Haverhill campus.

If you were passing by Room B103 and thought you recognized the cacophonous sounds usually associated with video games, you would be correct.

Behind the single door is the new NECC Esports Lab, which opened this fall. Inside the darkened room, 10 gaming computers and one projector cast a glow up and on to the players who sit in front of them maneuvering their joy sticks  and computer mice trying to win a game of Super Smash Bros. Ultimate, Overwatch, or Rocket League.

Welcome to the competitive world of esports, a rapidly growing varsity sport on college campuses. In the summer of 2016, just seven colleges and universities had varsity esports programs. Today there are more than 170 programs and it continues to grow.

NECC’s new varsity esports team, is under the direction of Computer Information Sciences (CIS) alumnus David Arivella, who pulls double duty as an academic technology assistant in the Harold Bentley Library on the Haverhill Campus. 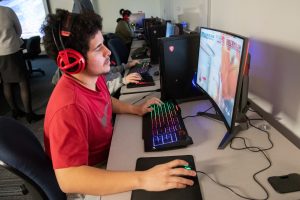 Alex Montanez of Merrimac,an exploratory major, is the captain of the NECC Overwatch team.

“We’re really excited about the start of the esports program,” said Dan Blair, NECC’s athletic director. “I know and the college knows, it is only going to grow from here. We’re are excited for what the future of the sport will be and look forward to competing at high levels.”

Northern Essex, boasts Arivella is home to some of the best Rocket League players in the world. Lawrence residents Christian Bova, an exploratory major, and Edwin Guzman, a biology major, the two currently hold the title of “grand champion.” Since practicing on the dedicated gaming computers with their immense processing power, modern hardware, and graphics cards, the players’ games have improved.

“They can feel the responsiveness,” said Arivella. “The more they practice here the better player they become.” 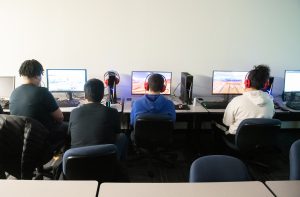 While many of his players are CIS majors like himself, Arivella said the team is open to everyone. To date, he said, he has found the players to be dedicated and willing to put in the time to take their game to the next level.

“Being in this position as head coach…I connect with the players on a level that I had never thought about,” Arivella said. “They are motivated with a real sense of pride and I hope they have all gained a sense of accomplishment and appreciation for their efforts.”

Arivella said he understands that gamers and their skill set aren’t always taken seriously or supported by others in their lives, but when they are in B103, he said, “they are recognized for their ability. I want them to feel appreciated for what they are doing.”

Adryan Espinal a biochemistry major, feels appreciated and so much more. “I joined because obviously I love gaming and the competition, but after I got here I realized what a cordial, friendly environment they had created.” 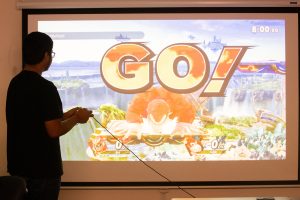 Chris Long of Haverhill a computer information science major, plays a game on the projector screen.

Chris Long, a CIS major, said he came for the competition and stayed for the friendship.

“This team really brings people together,” he said. “I didn’t know anyone when I started and now they are my friends.”

The esports team is holding open-tryouts until January 31, 2020. If you would like to learn more, join their Discord server at the following link.

For additional information on esports at NECC contact Arivella at darivella@necc.mass.edu