“A Christmas Carol” Returns to NECC 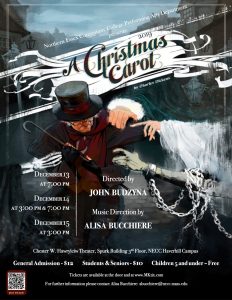 “A Christmas Carol,” by Charles Dickens returns to the Northern Essex Community College stage Friday, Dec. 13, with four performances ending Sunday, Dec. 15. in the Chester Hawrylciw Theater, on the third floor of the Spurk Building on the Haverhill Campus, 100 Elliott St.

Ebenezer Scrooge, the Ghost of Christmas Past, the Cratchit Family, and all other Dickens characters will come to life in this year’s play, adding fun and tradition to the holiday season under the direction of John Budzyna and NECC Professor Deirdre Budzyna, both of Newburyport.

A highlight of this production is the four madrigal singers who appear throughout the play singing traditional carols. The music director is NECC Music Professor Alisa Bucchiere, of Merrimac, who will lead the madrigal singers.

Tickets will be available at the door, although seating is limited. They can also be purchased through MKTIX.org 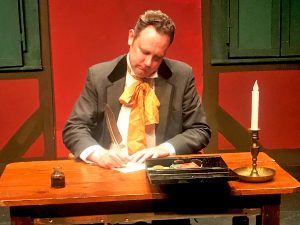 Mark Morrison takes on the role of Ebenezer Scrooge in NECC’s production of “A Christmas Carol.”

The NECC production was originally presented as a one-time fundraiser for the performing arts department. The production was so successful, it became an NECC community event each holiday season with faculty, staff, students, alumni and their family members auditioning for roles.