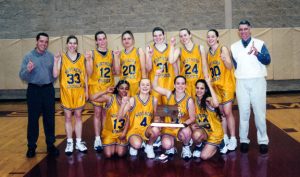 The members of the 2000-01 women’s basketball team and their coaches pose for a celebratory photo.

Northern Essex Community College’s athletic department has announced the 2020 induction class for the Athletics Hall of Fame. This is the second class since the creation of the Hall of Fame last year.

The induction ceremony is scheduled for Tuesday, March 24, at 6 p.m. in the Hartleb Technology Center on the Haverhill campus. The event is open to the public. Tickets can be purchased in advance for $30 and are available until March 20.

The 2020 induction class again includes one team and one individual. The 2000-01 Women’s Basketball team, which captured the Region 21 Championship and National Semi-Finalist, will be honored along with former men’s basketball coach the late Mike Rowinski who will be inducted posthumously.

This NECC women’s team was one of the most accomplished women’s teams in the college’s history, the 2000-01 women’s basketball team captured the Region 21 championship and advanced to the national semi-finals with an overall record of 24-10, including a national quarterfinal victory over top seeded Fulton-Montgomery. Coached by Andrew Pittington the team was led by Glenda Cancel, Jessica Hamilton and the Hamblet sisters Lyndsey and Tricia who all averaged double figures in points per game throughout the season. Cancel was named the Region 21 Tournament MVP and was joined on the All-Tournament Team by Hamilton and Tricia Hamblet following the team’s 76-47 victory over Springfield Tech in the regional final. Members of the team included Jamie (Potter) Pierce, Jalbert Parker, Lyndsey Hamblet, Tricia (Hamblet) Markey, Jessica Hamilton, Glenda Cancel, Bonnie Ciampa, Carolyn Dunn, Tenia Caldwell, and Lisa Lariviere.

A Haverhill High School alumnus and 1981 graduate of NECC with a degree in criminal justice, Rowinski was a men’s basketball student-athlete. He went on to earn a bachelor’s degree from St. Ambrose University in Iowa.

He is fondly remembered as “Coach” he amassed a record of 227-70 in 13 seasons serving as the men’s basketball coach, while also doubling as the college’s baseball coach in the spring season. 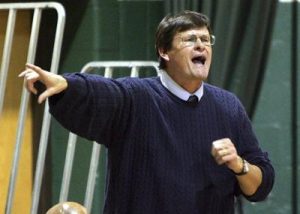 His reach extended far beyond the campus as he contributed to various youth and high school programs in the region. Following his time at NECC, Rowinski moved to Michigan where he captured a state baseball championship at Harper Woods High School. He would return to the region and coach the Georgetown High boys basketball program for eight seasons prior to his passing where he recorded a 95-79 record. Today, four area high schools (Georgetown, Newburyport, Amesbury and Triton) remember Rowinski’s legacy each December with the Rowinski Boys’ Basketball Tournament.

For more information on the Hall of Fame and induction ceremony, please contact NECC Director of Athletics Dan Blair at dblair@necc.mass.edu or 978-556-3820. Registration and tickets are available online .