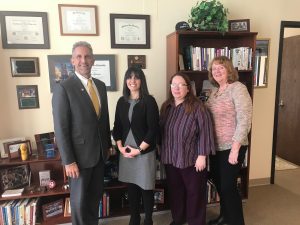 Lane Glenn with the recipients of the Employee Recognition Award, (l to r) Trish Portanova, Martha Bixby, and Sharon McManus.

The Employee Recognition Award recognizes the many and varied contributions of the college’s nearly 700 employees.  Employees are selected each quarter based on recommendations from supervisors and co-workers.  Recipients receive a $150 certificate to the restaurant or mall of his or her choice.

Bixby, an academic advisor was nominated by Stephanie Wares, NECC’s director of the Student Success Hub who praised her saying “She is humble and is always willing to come in early and stay late.” Her nomination was supported by colleague Mike Rideout, transfer advisor,  who wrote, “ Martha is always friendly, cooperative, supportive, thoughtful, and professional…she is an unsung hero.” Vanessa Desani, academic advisor and community referral counselor, and Jayne Ducharme, academic advising coordinator, also supported the nomination.

An alumna of NECC, Bixby has worked at the college, in different positions, for 11 years. She earned two Associate of Science degrees from NECC in Computer Information Sciences: Computer Operations and Accounting. She earned a Bachelor of Science in Business Administration, a Master of Business Administration, and a graduate certificate in human resource management from Southern New Hampshire University.

She was nominated by Janel D’Agata-Lynch, coordinator civic engagement, service-learning & community resources, who wrote,  “She has been a constant support and encouragement to the Office of Civic Engagement and Service Learning, working in and out of the classroom to expand civic inquiry and engagement opportunities for students.” The nomination was supported by Paula Richards, coordinator of the service-learning faculty fellows program, and Janice Rogers, associate dean liberal arts and student success hub.

McManus, who has worked at NECC for five years, was nominated by Ashley Moore, director of academic, career, and civic engagement, who praised her for, among other things, “her consistently high on-the-job performance…she is also an excellent team player and she is committed to going the extra mile to make sure the work gets done.”

McManus earned a Bachelor of Arts in Sociology and Spanish from the University of New Hampshire, a Master of Higher Education in Leadership from Merrimack College, and is a Certified Gallup Strengths Coach.