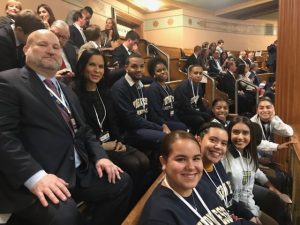 A contingent representing NECC attended the State of the Commonwealth speech this week.

The group broke into smiles when the Governor introduced them during his remarks.  Talking about education reform, Baker highlighted successful initiatives such as “gifted and talented programs, acceleration academies, parental outreach, applied learning opportunities, longer school days, and early college programs” that have “helped students find their footing.”

Speaking of Lawrence’s Early College partnerships, Baker said “Dozens earned full scholarships at area colleges.  Joining us today are 11 of them, 6 from Merrimack College and 5 from Northern Essex Community College.”

The students attended the annual event, which was televised, and were seated in the visitors’ gallery with Massachusetts State Education Commissioner Jeff Riley, Lawrence Mayor Dan Rivera, and Lawrence Superintendent of Schools Cynthia Paris.

The Lawrence High School (LHS) alumni participated in NECC’s Early College Program while attending LHS. They are all now enrolled at NECC under the Promise Program, which supports Early College students who attend NECC after graduating from high school to pursue a degree or certificate.

Baker encouraged them to stand and be recognized. He congratulated them on their achievements and wished them the best on continuing their education. They received a strong ovation from legislators.