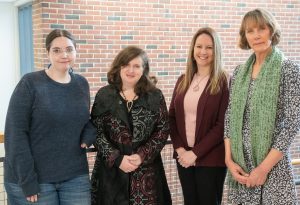 NECC faculty Adrianna Holden-Gouveia, Meredith Gunning, Jody Carlson, Pamela Hallock and Mary Jo Shafer (not in the photo) are recipients of the NISOD Awards for Excellence.

Since 1978, NISOD has been dedicated to the professional development of faculty, administrators, and staff; and to the continued improvement of teaching and learning, with the ultimate goal of student success.

Here is additional information on each of the recipients:

Machado wrote, “She is one of the most dedicated professors at NECC. She is extremely passionate about her discipline and that passion ignites her classroom lectures and discussions. Meredith takes great care in providing valuable feedback to her students.”

Gunning earned Bachelor of Arts Degrees in Political Science, History, and Christianity and Culture from the University of Toronto; a Master of Art and PhD. in Philosophy from Fordham University.

Adrianna Holden-Gouveia, has been teaching in the Computer Information Sciences Department since 2006. She was nominated by Carolyn Knoepfler, dean of science, technology, engineering and mathematics, who wrote, “Adrianna is compassionate when it comes to her students and advocates for them at each stage of their career here at NECC. She is the first to come to me to ask me if I need help with an event and she follows through with everything she promises. Adrianna keeps in touch with her former students and continues to mentor them long after they leave the college.”

Holden-Gouveia holds a dual major in mathematics and computer science from Clark University and a Master of Business Administration Rivier University.Meredu

Jody Carson, is a graduate of the NECC Early Childhood Education (ECE) Program. For the last 13 years she has taught in the program. She is now coordinator and associate professor of the NECC Early Childhood Education program. She is also now serving on a state-wide Open Educational Resources Advisory Council established by the Board of Higher Education. She was nominated by Kelly Sullivan, dean of professional studies, who wrote “Jody has been a leader statewide in the OER project and her work has led to the adoption of OER materials by many faculty both at NECC and throughout the state, saving students hundreds of thousands of dollars. Jody’s innovation has extended to the PIF (now Higher Education Innovation Fund) grant. Using the money from the grant, Jody has led the other ECE faculty to develop a number of ECE courses in the CBE format. The goal is to have the entire ECE degree offered online by the fall of 2021.”

Mary Jo Shafer, has been teaching journalism and English composition at Northern Essex for the past 10 years. She also serves as faculty advisor to the student newspaper while herself working as a part-time copy editor at The New Hampshire Union Leader. She was also nominated by Callahan, who wrote, “There are very few colleagues on campus who understand Mary Jo’s job. As the faculty advisor to the NECC Observer for ten years, Mary Jo has maintained the student newspaper’s tradition of excellence and independence. It is a truly remarkable, and increasingly less common, occurrence to have a student free press exist on a community college campus. Mary Jo has guided and trained NECC’s student journalists to produce a relevant, credible, and timely newspaper that is entirely created by students.”

She holds a Bachelor of Arts in American Studies and Creative Writing from Hampshire College, and a Master of Arts in Journalism from the University of Alabama where she was a Knight Fellow in Community Journalism.

Pamela Hallock, has been a member of the adjunct faculty at NECC for the past 6 years. She teaches chemistry and forensic science. She is also the adjunct Faculty Fellow, where she supports other adjuncts with a goal of increasing professional development opportunities, coaching and consultation, and increased adjunct engagement with the college. She was also nominated by Knoepfler, who wrote, “Pam is an outstanding teacher, faculty member, mentor and innovator at the college. From the time Pam started at the college she has brought in guest speakers every semester to her class and this semester she is taking her chemistry class to UMass/Lowell for lab so they can meet a UML faculty member and become familiar with the campus.”