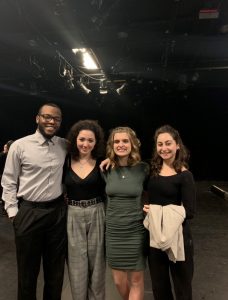 Two-hundred and eighty-eight students from two and four-year colleges and universities were competing and only 16 students made it to the final round of the competition, including two Northern Essex students, Sarah Durning and Gwynnethe Glickman. Durning is a general studies: individualized option major from North Andover and Glickman is a liberal arts major from Newbury.  They were accompanied by their acting partners NECC students Carlyle Bien-Aime, a business management major from Haverhill, and Zaida Buzan, a liberal arts major from Somerville.

In the final round, Glickman won the Kennedy Center Award for – Best Comic Actor. She presented two scenes and a monologue. Her comic scene was from a play “Anything for You,” by Cathy Celesia.

“Getting to participate in the final round is an incredible honor,” said Brianne Beatrice, NECC theater professor. “Having two finalists representing one school in unheard of and I am deeply proud of our students.”

This was the second award Glickman received in as many years from the Kennedy Center. Last year, during Festival 2019, she was awarded Outstanding Performance for her role as Mash in the NECC production of “Stupid F*cking Bird”.

This year, the entire cast of NECC’s fall production of “Good People” was awarded ‘Best Ensemble’. Best Ensemble was an award that was decided when a KCACTF representative came to view NECC’s production of “Good People” last fall. The respondent submitted the award to the Kennedy Center. The cast of Good People included – Durning; Aileen Corniel of Lawrence; Ben Beverage of Lawrence; Eliza Volpicelli of Salem; and Glickman.

“I am elated for their successes,” said Brianne Beatrice, NECC theater professor. “This is a record breaking win for theater at Northern Essex Community College and I have continued gratitude for the support we get from the College.

Started in 1969 by Roger L. Stevens, the Kennedy Center’s founding chairman, the Kennedy Center American College Theater (KCACTF) is a national theater program involving 18,000 students from colleges and universities nationwide which has served as a catalyst in improving the quality of college theater in the United States. The KCACTF has grown into a network of more than 600 academic institutions throughout the country, where theater departments and student artists showcase their work and receive outside assessment by KCACTF respondents.  In January and February of each year, regional festivals showcase the finest of each region’s entered productions and offer a variety of activities, including workshops, symposia, and regional-level award programs.