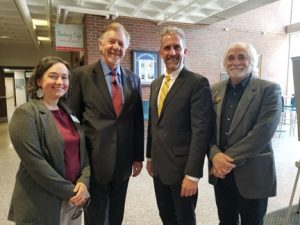 According to Egmont, a declining national fertility rate (1.7 children per mother) isn’t meeting the replacement rate (2.1 children per mother), meaning that without an influx of immigrants we won’t be able to maintain our population in the United States. 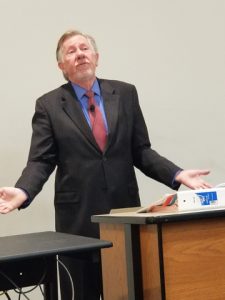 “We must decry the lie that immigrants steal the jobs when we see in facts that 50% of the Fortune 500 companies, Americas big employers, were founded by immigrants and that immigrants will fill the voids from writing code at our top tech companies to picking strawberries.”

Comparing the Red Sox to the many health care organizations and companies that depend on the skills of immigrants, Egmont shared that the 2019 roster included five Venezuelans, two Dominicans, and players from Mexico, Taiwan, Aruba, and Hong Kong.

For a decade, Egmont has served as president of the International Institute of Boston, the largest immigrant and refugee service agency in New England.   He also had co-chaired the Massachusetts Governor’s Advisory Council on Immigrants and Refugees and has been appointed by five governors to that advisory board.

His presentation was made possible through funds from the college’s Social Justice Award, which was presented for the first time to Dr. Paul Saint-Amand, retired English professor, at the college’s 2019 Commencement.  The Social Justice Award recognizes individuals, groups, departments, or initiatives that promote values such as a commitment to equity and diversity or the advancement of human rights and social justice.   It comes with a cash prize of $1961—in honor of the year the college was founded—that the recipient uses to enhance social justice initiatives.

Approximately 150 students, faculty, and staff attended the presentation, and when Egmont asked how many had an immigrant in their family, half the audience raised their hands.

Here is a full copy of Egmont’s remarks.

To learn about nominating someone for the 2020 Social Justice Award, reach out to Janel D’Agata-Lynch, NECC coordinator of civic engagement, service learning, and community resources, jdagatalynch@necc.mass.edu or 978 556-3471.