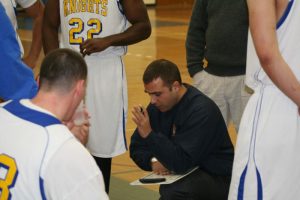 Northern Essex Community College has announced that Darren Stratton will return to the college as men’s basketball coach for the 2020-21 season. The announcement was made by NECC Director of Athletics Dan Blair on Thursday.

Stratton previously served as the teams head coach from the 1999 through 2015. He was the team’s assistant coach for two seasons prior to taking over the reins of the program. A graduate of NECC, Stratton played under Mike Rowinski from 1994-96.

“I am pleased to have Darren Stratton return to the program as head coach, he had much success in his previous tenure and I look forward to the basketball program returning to the upper echelon of region 21 under his leadership,” said Blair.

During his first tenure as head coach, the program made regular appearances in the post-season which included two appearances in the Region 21 Championship game in 2003 and 2009, along with two MCCAC State titles. A 200 game winner, Stratton also had a knack for getting his players to the next level with multiple student-athletes earning scholarships to play at four year colleges.

A Haverhill native, Stratton has strong ties to the basketball community throughout the Merrimack Valley which will enable him to quickly build upon the previous success he had as the programs leader.

“This is a wonderful homecoming for me and my family. I’m grateful to have the opportunity to finish what I started, and that is to win a championship”, stated Stratton on his excitement of returning to the program.

Stratton will inherit a team that went 5-20 this past season and made its last post-season appearance in the 2017-18 season finishing as regional semi-finalist.