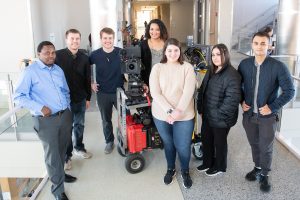 Film crew and NECC student extras take a minute from filming to pose for a photo.

The El-Hefni Allied Health and Technology Building may have been designed to house NECC’s health programs, but several times a year, camera crews roll in and the sleek 21st Century building at 414 Common St. in Lawrence is transformed into a hospital, doctors’ offices, and a professional building.

While Allison Gagne, NECC’s event coordinator, admits to hoping the building would serve a dual purpose, this isn’t what she had in mind.

“I never set out to market the building for this,” she said. “I had hoped that local fire and police departments, and physicians would use the facilities for training purposes.”

But in 2014, when she took a call from a location scout, it set in motion a new role for the Allied Health & Technology Center which had just opened that spring. Outfitted with high-tech equipment including simulated mannequins and an embedded ambulance on the first floor, it first caught the attention of a German made-for-television film crew.

Three scenes from the movie “Forget Me Not,” featuring German actors speaking German while portraying Americans, were filmed by the Van Wormer Production Company. The halls and several of the rooms were pressed into service as a DNA lab and a neurologist’s office.

The location scout recommended Gagne upload photos of the building and campuses to two websites – Mass Film Office and New England Film. She did, and now several times a year she is contacted about the possibility of production crews shooting scenes on campus. The German production company alone, has returned six times. 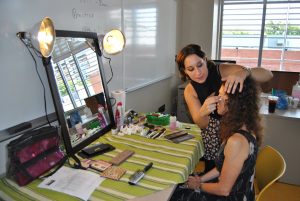 Back in 2014, Makeup artist Rose Westerman prepares an extra for her role in the German film “Forget Me Not”. A few scenes were filmed at NECC.

To date, Gagne estimates more than $100,000 has been raised from the location rentals.

Commercials for companies from W.B. Mason to U.S. Cellular as well as a local utility have been filmed at NECC.

Boston area film directors Clifford and Griffin Nash said El-Hefni is attractive to production companies like theirs for a number of reasons.

“We wanted the hospital look, with the space to hold a crew of 30 or more, which we can’t really do in a real hospital,” Cliff Nash said. “The school has been more than accommodating to our needs. It helps that Allison speaks our language. She knows just what we need to load and unload our equipment.”

A private parking lot, off-street parking, and easy access to the building are all pluses in the eyes of the film companies.

“Plus there are lots of props here…mannequins…fake blood…lots of medical equipment as well as people who know how to use it,” he said. “This building has a Boston feel only it’s outside of Boston.”

Last summer it was the Haverhill campus that was receiving attention, when the German production company descended on the Elliott Street location shooting interior and exterior shots.

The buildings and campuses aren’t the only ones captured on film. A recent film shoot employed a half dozen NECC students as extras. Nina Sigurdardotter, 29, of Haverhill was one of those students.

“I just had to walk back and forth in a scene,” the health specialization student said. “I didn’t have to speak which was good because I am shy.”

She agreed with psychology major Johanan Ruelas, 20, also of Haverhill, it was a fun way to earn $150 a day.

“It was really fun,” he said. “I was kind of shy at first, but it was a nice way to meet other Northern Essex students and staff.”

As accommodating as the college is to the production companies, Gagne said, it is of utmost important that there is no interruption with the school’s scheduled classes and activities.

“They have to respect our space, our students, and our faculty and staff” she said. “I tell them to leave it better than they found it.”

Like when they frosted windows in one of the rooms and Gagne asked them to leave the enhancement.

Sometimes they will paint a room for a particular scene and then repaint it to its original color before they leave, she said.

For additional information on renting NECC buildings or campuses, contact Gagne at agagne@necc.mass.edu