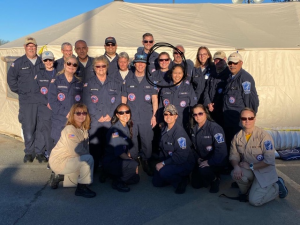 Rad Tech Professor Angela Bowers (center circled) with other members of the trauma team she was deployed with.

NECC radiologic technology professor Angela Bowers couldn’t have known a dozen years ago when she enrolled in a bone identification class that it would one day lead to her caring for cruise ship passengers during a pandemic.

But that is just what happened, according to the Derry, N.H. resident.

The mother of two just returned from a two-week deployment with the National Disaster Medical System (NDMS) where she served with the Trauma Critical Care Team – East monitoring patients removed from the Grand Princess and Diamond Princess cruise ships docked in California. More than 100 cruise passengers, from across the country, from infants to elderly, were flown to Dobbins Air Reserve Base in Marietta, Georgia, and quarantined in the barracks for 14 days, where Bowers cared for them.

The NDMS is a federally coordinated healthcare system and partnership of the U.S. Departments of Health and Human Services (HHS), Homeland Security (DHS), Defense (DOD), and Veterans Affairs (VA). The purpose of the NDMS is to support state, local, tribal and territorial authorities following disasters and emergencies by supplementing health and medical systems and response capabilities.

The 27-year rad tech veteran joined the NDMS more than 10 years ago. Bowers, who earned a certificate from St. Mary’s Hospital in West Palm Beach Florida, was working on her bachelor’s from Indian River State College, when she enrolled in the forensic anthropology course and first learned of the NDMS. After researching its role in disaster response she began the arduous task of applying. It took two years of paperwork and background checks for Bowers, who hold a master’s degree from Thomas Jefferson University, to be accepted. Bowers has spent the last 10 years attending online and in person trainings and summits preparing for an opportunity to assist in a disaster – natural or otherwise. The opportunity came when she was activated at 11:05 p.m. on March 12.

“COVID brought with it disruption and anxiety. Despite the cold and the rain we worked collaboratively to keep the passengers safe,” she said. “Initially they were frustrated and aggravated. Without their luggage, some didn’t even have essentials like shampoo, soap, or toilet paper. We built connections. They called us by our first names. We would bring non-essentials to them like chips or dark chocolate to make the situation better. Eventually they opened up to us and would have conversations with us.”

While Bowers certainly doesn’t wish for another disaster, and despite the 12 to 15-hour work days, she said her deployment was a positive experience. Colleagues, she added, became family.

“We don’t do this for pay. We do it to serve others,” Bowers said. “I enjoyed the experience and I think we made a difference. You could see the smiles under the masks.”

NECC offers an associate degree in radiologic technology. For more information on the program, visit the program page. Angela Bowers is program director.