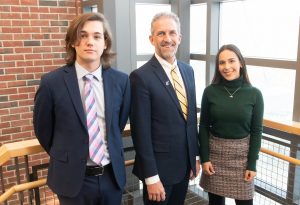 Two Northern Essex Community College students Zaida Melina Pimentel Gamboa of Rowley and Jonas Ruzek of Amesbury were named to the 2020 Phi Theta Kappa (PTK) All-Massachusetts Academic Team based on outstanding academic achievement and exemplary student service. In addition, as the top-scoring community college student in the Commonwealth, Pimentel Gamboa was named the 2020 New Century Transfer Pathway Scholar which includes a $2,250 scholarship from the Coca-Cola Foundation.

Each spring, the Massachusetts Association of Community Colleges (MACC) honors students selected for the academic team at a ceremony at the State House. This year, students will be honored virtually during “PTK Community College Excellence Week”, which runs from Monday, April 27 to Friday, May 1.

“Zaida and Jonas are exceptional students who have contributed so much to the college,” said Lane Glenn, NECC President. “They will be missed, but I can’t wait to see how well they do as they continue their education and pursue their careers.”

She is a an international student and business transfer major who has completed courses at Harvard Extension School and Middlesex Community College. Her future plans include transferring to a four-year institution where she will major in international business with a marketing/economics focus. She has already been accepted to Bentley University.

She is the president of NECC’s chapter of Phi Theta Kappa honor society, the national honor society for community college students, and is a member of Alpha Beta Gamma, business honor society. In addition, she is the founder of A Happy Holiday, a nonprofit project to bring toys to children in impoverished neighborhoods in her native city of Veracruz.

Pimentel Gamboa, who graduates in May, said of the honor, “This opportunity allows me to continue challenging myself to achieve greater goals I set, allowing me to inspire other young women to pursue their dreams regardless of any setbacks that they might be encountering.”

Ruzek, a journalism/communication major, left Amesbury High School at the beginning of his junior year due to illness. He later earned his HiSET diploma and enrolled at NECC in the fall of 2018 with the intent of pursuing acting. He had acted in community theater since he was 12. He has written for the student newspaper the “NECC Observer” and hopes to pursue a career in journalism amplifying the seldom heard voices of his community. He has already been accepted to Emerson College and UMass Amherst’s Honors College.

“I have aspired to be an active citizen instead of an idle consumer of democratic privileges,” he said.

Ruzek works at a memory care facility where he offers intellectually simple, yet stimulating, exercises to the residents.

Phi Theta Kappa is the premier honor society recognizing the academic achievement of students at associate degree-granting colleges and helping them to grow as scholars and leaders.

Here is a link to a video honoring the two scholars.