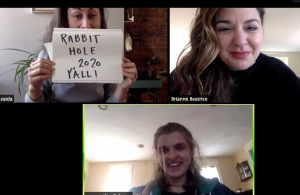 The nearly two-hour production was the culmination of weeks of virtual rehearsals that the students participated in from the safety of their homes.

“Although we still have hopes to stage the production someday – I was very pleased with the actors work and commitment to sharing this beautiful story in an honest way. it’s what I call ‘creativity on the fly,” Brianne Beatrice, NECC theater professor and director of the show.

Here is a link to the Zoom recording of the play. The password is 7H@B.h4*.

The performance, opened with a “curtain” speech by Beatrice. The performance was recorded and is now available  for free online. This is free and open to the public.

The cast rehearsed since February under the direction of Beatrice and NECC alumnus Benjamin Beveridge of Lawrence, assistant director. This was the first virtual production presented by NECC students in the history of the college. The actors performed from the safety of their homes. They were responsible for their own costumes.

“I know the cast was excited to share their work. While initially they rehearsed in the theater on campus, the pandemic forced the rehearsals online. They rose to the occasion and adapted quickly,” she said.

“Rabbit Hole” is the 2007 Pulitzer Prize winner for drama. It follows Becca and Howie Corbett, who have everything a family could want, until a life-shattering accident turns their world upside down and leaves the couple drifting perilously apart. The play charts their bittersweet search for comfort in the darkest of places and for a path that will lead them back into the light of day.

For additional information on the play contact Beatrice at bbeatrice@necc.mass.edu.