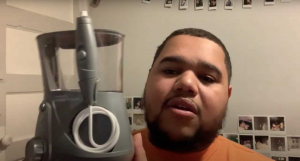 Joselito Rodrigues of Lawrence explains what a “water flosser” is.

The event was used to collect donations for the college’s Student Emergency Fund and was attended by hundreds. Episodes are available for the public on the Speechapalooza YouTube channel. The Student Emergency Fund provides laptops and/or internet access, tuition assistance and stipends for students dealing with food insecurity, the switch to remote learning as well as other needs connected to the COVID-19 pandemic. As of Tuesday, May 5, the fund had raised at least $15,099,.

This year brought the sixth annual iteration of Speechapalooza, the first ever to be held online.

Throughout its production, the event gained press attention in publications including The Eagle Tribune and Merrimack Valley Magazine .

Speechapalooza was publicized in the NECC Newsroom and in local media outlets. It was also promoted by the Lowell Association for the Blind (LAB). Former Executive Planning Committee Co-Chair Amari Butler of Methuen is a member of the LAB.

She says, “Being one of the co-chairs of Speechapalooza has taught me to be more of a leader. It has given me more confidence despite my disability.”
The Executive Planning Committee coordinated the entire event and wrote and disseminated the press releases which were run in the aforementioned outlets.

“Especially in a challenging time like this, we want to give students an opportunity to voice their concerns and opinions,” says Jasmine Sanchez of Haverhill, another former co-chair of the Executive Planning Committee. “We don’t often get to hear what students want to say, so adapting rather than cancelling the event was a no-brainer.”

After stay-at-home orders and school closures were effected by Mass. Gov. Charlie Baker about halfway into their semester, students of NECC’s Principles of Public Relations class converted Speechapalooza into an online event so that student speakers could be celebrated in spite of COVID-19 and so that money could be raised for fellow students in some way affected by the pandemic.

Student speeches exhibited a wide range of subjects. One student’s speech constitued an examination of the nuances of biomedical engineering and another’s presentation recounted a personal story of beating drug addiction.

John DiBurro of Haverhill, a student of Principles of PR, proudly states, “Our team worked incredibly hard to make this event happen. Through our efforts, we achieved a greater audience than anticipated and raised a substantial amount of money for those in need.”

“Our lineup was a wonderful reflection of the students who come to our school,” says Andrew Venditti of Haverhill, an Executive Planning Committee co-chair.

Cruz says, “The tenacity with which our PR students pursued this event shows a lot about how hard-working NECC communications students are.”
Other students involved in coordinating the event included William Tapley of Sandown, NH, DiBurro, Rachel Anderson of Haverhill, Evan O’Connell of Reading, Julia Matos of Groveland, Dilenia Martinez of Lawrence, Finbarr Arsenault of Amesbury and Katherine Townsend of Merrimac. 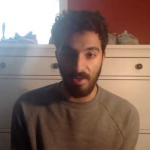 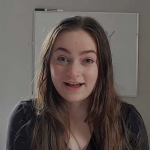 Mackenzie Macquire of Merrimac explained the principles of biomedical engineering. 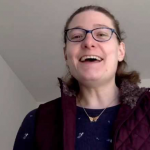