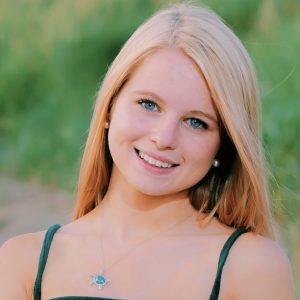 Most students get their high school diploma and then go off to college, but Newburyport native Violet Merrill took what she calls “a nontraditional path”.

The 18-year old earned her Associate Degree in Liberal Arts with High Honors from Northern Essex Community College in May and this month she’ll receive her diploma from Newburyport High School.

Merrill has been taking courses at Northern Essex every semester, and during the winter intercession and summers for the past two years. In the fall, she will transfer to UMass Amherst as a junior. She plans to take the money she saved on her first two years of college, and use it to continue her education with a master’s or law degree.

She says her mother, writer Marianne Curcio of Newburyport, heard about the Early College program at Newburyport High School, in which students take Northern Essex courses and earn high school and college credits, and encouraged her to participate.

Initially, she was just planning “to take a few courses to get a jumpstart” on college, but things just “snowballed” as she became more passionate about her learning.

In addition to taking college courses with her Newburyport High School peers, she signed up for additional courses, offered both online and in the classroom.

“I’ve always taken school seriously but I wasn’t an exemplary student,” says Merrill. “The turning point was taking classes at NECCO. I had more of a passion for what I was learning.”

Her junior year, Merrill spent her mornings at the high school and her afternoons taking college courses and she credits Newburyport High School for being so flexible.

It wasn’t until her senior year that she decided to set the goal of finishing her degree while still in high school.

What motivates Merrill most is her passion for social justice. She first became interested in social justice issues after the shootings at Stoneman Douglas High School in February of 2018.  Since then, she has lent her youthful voice to many issues such as gun control and voter registration, and she plans to pursue a career that helps to make the world a better place, either in public health or law.

At Newburyport High School, Merrill ran track for four years, played tennis for two, and played a leadership role with Interact, a service club sponsored by the local Rotary Club.

Early College is open to Newburyport juniors and seniors, who can take courses at a discounted rate of $110 a credit hour, which is half the true cost.

The benefits of Early College include exploring career options, taking college-level courses, and earning credits that are transferable to other colleges, says Marcy Yeager, NECC’s executive director of PK12 partnerships and international studies.

Merrill would like younger students to know that they “shouldn’t be afraid to take a nontraditional educational path. Traditional school can be limiting, but you can create your own reality. That’s what I did and it resulted in a lot of benefits.”

Northern Essex Community College has campuses in both Haverhill and Lawrence. It offers more than 60 associate degree and certificate programs as well as hundreds of noncredit courses designed for personal enrichment and career growth.  Each year, more than 5,000 students are enrolled in credit associate degree and certificate programs on the Haverhill and Lawrence campuses; and another 2,600 take noncredit workforce development and community education classes on campus, and at businesses and community sites across the Merrimack Valley.  For more information, visit the website at  www.necc.mass.edu or call 978-556-3700.