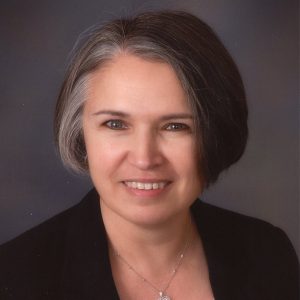 Salem, MA resident and Northern Essex Community College alumna Mabel Covarrubias-Doucette ’12 has been selected as the 2020 recipient of the NECC Outstanding Alumni Award, an honor granted on an annual basis to a graduate who has achieved career-related success, is active in the local community, and/or has exemplified active support for the college’s efforts. Her nomination was announced following a vote by the NECC Alumni Board, with support from President Lane Glenn.

Covarrubias-Doucette, a practicing attorney who holds a juris doctorate from New England Law, in addition to two bachelor’s degrees from UMass Lowell and an associate degree in paralegal studies from NECC, began the journey to her current career at age 43. Previously the successful co-owner of a wireless communications construction company, she found herself hitting restart following the financial impact of the great recession, which forced her company to close after 15 years of operation.

“I was at a crossroads in my life,” she says, reflecting on that time.

By 2011, she made the decision to pursue a new career path, and set up a meeting with an NECC academic counselor to get started. Within one hour of arriving on campus, she was already sitting in on her first college course.

“I went into my first class with no books, no pen and no paper,” she says. “I finished the semester with all As and with the original four classes that [the academic counselor] had signed me up for. The rest is history!”

Covarrubias-Doucette is now the owner of MCD Immigration Law, based in Salem. A practicing attorney, who grew up in both the U.S. and Mexico, she specializes in the areas of immigration and naturalization laws.

On winning the NECC Outstanding Alumni Award, Covarrubias-Doucette says “I’m flattered and deeply honored. I’m very proud of my time at NECC and what I accomplished there.”

“Mabel has overcome every obstacle in pursuit of her degrees and is very deserving to be honored as an outstanding alum,” she writes. “…She is curious, intelligent, and committed to social justice. I am in awe of the impact she has in her clients’ lives and in our community.”

Throughout the years, Covarrubias-Doucette has remained closely connected with NECC by participating in panels, mentoring students, and serving as a guest speaker at PACE program events. A first-generation college graduate herself, she prioritizes involvement in efforts that help students work toward their academic and career goals.

To learn more about the NECC Outstanding Alumni Award, please view the webpage or contact the Alumni Office at alumni@necc.mass.edu. Nominations are accepted on an annual basis.