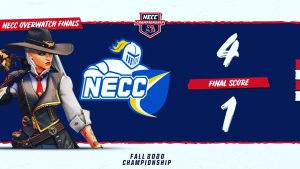 Haverhill, MA (November 23, 2020) – The Northern Essex Community College Esports Overwatch team captured the inaugural New England Collegiate Conference Overwatch championship on Saturday afternoon in convincing fashion with a 4-1 victory over the Eagles of Central Methodist University of Missouri. The championship is the third in the programs history since its establishment at the start of the 2019-20 year, as the Knights captured a pair NJCAA Championships in the spring of 2020 in Rocket League and Super Smash Bros. Ultimate.

On the opening map, Northern Essex rallied for a 3-2 victory on King’s Row getting strong play early and throughout the entire match from Jacob Pimentel (Tilted) of Haverhill. After CMU took the Busan map by a 2-1 score and evening the match at one apiece, the Knights shifted into cruise control taking the final three maps.

Grabbing the final three maps Temple of Anubis, Havana and Hollywood, by 2-1, 3-2 and 3-2 scores NECC grabbed the championship. Kirmy Ramos (Kirmy) of Lawrence earned Player of the Game honors leading the Knights attack throughout the match. Caroline Shaw (skgcarol) of Merrimac also provided strong aerial support throughout the match.

The Knights will look to defend their championship when competition resumes in the spring semester.

In getting to the championship match, the Knights rolled past the Dragons of Howard (MD) Community College by a 3-0 final score taking the Kings Row, Nepal and Watchpoint Gibraltar maps by scores of 3-2, 2-1 and 2-1. Howard would get the initial points, before the Knights flipped the point and cruised to the map wins and advance to the championship final. Pimentel was the Player of the Game in the semi-final victory.

Learn more about Esports at NECC.