Getting a Head Start on College: Northern Essex Partners with Local High Schools 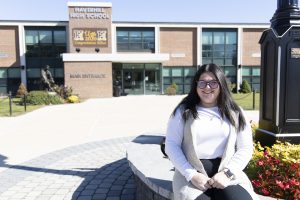 Julia McLaughlin, a 2016 graduate of Haverhill High School, earned a bachelor’s degree in psychology from Sacred Hearts University in Fairfield, Conn in just three years, and, as a result, she was working in her field—as a case manager at an addiction and treatment center—a year ahead of her high school friends.

How did she accomplish such a feat? McLaughlin was one of a growing number of students taking advantage of Early College through NECC, which allows students to earn free or deeply discounted college credits while still in high school.

With the $35,000 she saved on her bachelor’s McLaughlin is now enrolled in a 16-month accelerated nursing program at Northeastern University, and will graduate this coming year.

Early College is a Statewide Initiative

Students from these designated programs earn college credits for free while they’re still in high school. Plus, the classes count toward both students’ high school graduation requirements and their future college degrees.

Interest in Early College is Growing

Since it launched in 2018, the Massachusetts Early College Initiative has seen enormous growth, with 4,200 students from 37 high schools projected to be enrolled by fiscal year 2021. These students will earn an estimated 25,000 college credits and realize savings of $5.4 million dollars in tuition and fees.

At Northern Essex, 570 local high school students were enrolled in the fall of 2020, a 50% increase in just one year.

“We have students graduating with a year of college done from high school,” Yeager says. “The savings from student loans and student debt are unbelievable.”

NECC also offers its Early College program to students from other high schools, too. Those students can earn credits at a 50% discount. Additional financial help is often available to those students, too.

Here’s Who Benefits Most from Early College

“I think it’s most important for students who maybe didn’t see college as an option for financial reasons,” said Luisanna Crespo, NECC’s PK12 and international programs coordinator. Indeed, Department of Elementary and Secondary Education data shows that high school graduates who participated in Early College programs are enrolling in college at a rate that is 20 percentage points higher than their school or state peers. Additionally, their FAFSA completion rates are 25 percentage points higher than school peers.

The program has also benefitted underserved communities, with two-thirds of students enrolled in Early College programs identifying as Black or Latino. Moreover, Early College students of color attended college at higher rates than peers of the same race not enrolled in the program, according to state data.

And because the Early College program also includes “pathways” that mimic college majors, including business, criminal justice, healthcare, and education, students can experience the rigors and culture of college while also getting a taste of their possible major.

“Even to this day my friends and I still talk about how thankful we are that we did everything that we did,” she says.

This article was written by Alex Pecci, ’02.