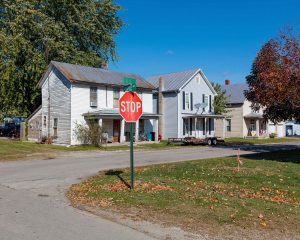 The work of Los Angeles Photographer William Short is featured in “My Red America” available online now through the NECC Linda Hummel-Shea ArtSpace.

In “My Red America”, the latest exhibit from The Linda Hummel-Shea ArtSpace at Northern Essex Community College, Los Angeles Photographer William Short travels back to rural southwestern Ohio, a very special place from his childhood, almost 30 years after he had last been there.

Once “magical, safe places”, he finds a different scene when he returns. “Both Winchester and West Union are shells of what they were when I was a child,” he explains. “Unemployment, poverty, and drugs have taken over. Storefronts are empty. Buildings and homes lie in disrepair.”

In this online exhibit with over 40 photographs, Short chronicles the changes that have occurred, capturing homes in various stages of repair, run-down local businesses, rural highways, and relics from the area’s rich farming tradition. The exhibit is available online now through Feb. 27.

Short was drawn back to this place after the 2016 presidential election.

“I wanted to visually understand how Adams County had changed and how those changes affected the towns I had loved so much in my childhood.”

The towns Winchester and West Union are predominantly White (90%) and conservative (In 2016, 81.3% voted for President Trump) and have undergone hard times, transitioning from an agrarian economy. Twenty-four percent of the population live below the poverty line and the median household income is $36,000, $16,000 below the state average.

The exhibit website features an interview between the photographer and Marc Mannheimer, Northern Essex art professor and ArtSpace gallery director. The two have known each other since the 1980’s. 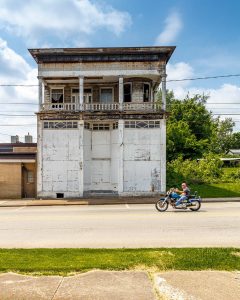 “From the beginning of my awareness of Bill’s work I was drawn into the simple yet complex nature of it,” says Mannheimer.  His photographs always seem to capture the initial surface of a “scene” but as one gazes you are brought into the true depth of his vision.”

Based in Los Angeles, Short specializes in architectural, editorial, and documentary photography. He earned a BFA from Antioch College in Ohio and an MFA from the University of Southern California and has taught at Moorpark College since 1999.

A Viet Nam combat veteran and anti-war resister, he is the co-author, with Willa Seidenberg, of “A Matter of Conscience: GI Resistance During the Vietnam War”.

Here is the link to the ArtSpace exhibit.

Located in the Bentley Library Building on NECC’s Haverhill Campus, the Linda Hummel-Shea ArtSpace Gallery features exhibits by NECC students, faculty, and artists from around the region and the world.