NECC Launched His Career as a Coach and Athletic Director 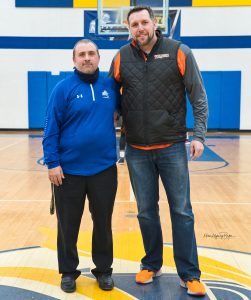 NECC Basketball Coach Darren Stratton and Sercan Fenerci, who played for the Knights before graduating in 2004.

When Sercan Fenerci ’04, was 20 years old, he slipped a note under the office door of Darren Stratton, the men’s head basketball coach at Northern Essex Community College, that read, “I’m a 6’7″ Turkish guy looking to play basketball.”

Little did he know that the note would help change the trajectory of his life forever.

He was soon playing basketball for the Knights, as they advanced to the regional finals, earning him recognition as player of the region.

He was also set on a path that led him to graduating from NECC in 2004; to getting a full scholarship to Angelo State University in Texas, where he continued to play basketball; to earning a master’s degree from Southern New Hampshire University; to becoming assistant athletic director at Bunker Hill Community College and to founding the professional basketball team the Providence Pirates, of which he’s president and CEO.

Fenerci’s accomplishments are almost too many to list— Massachusetts Basketball Coaches Association Coach of the Year; Wheelock College coach of the year; national team coach for the Turkish Basketball federation; and head boys basketball coach for Acton-Boxborough Regional High School, just to name a few—and many of them started at NECC.

“The lifetime experience I had at Northern Essex helped me grow as a person,” he says.

Fenerci moved to the United States at the age of 19 and spent a year taking English-language classes before setting his sights on college. At NECC, he made friends, found a supportive community, and had valuable guidance in navigating a new campus, a new country, and the college transfer process.

In fact, when asked to sum up his experience at NECC, Fenerci does it in one word: Family. He even grew to consider Coach Stratton a father figure.

“To me, it’s a very family-oriented college that a lot of students can benefit from,” he says. “I believe in the community college system, not because I work in it, but because I came from it, I’ve lived it.”

Learn more about becoming an international student at NECC.

This story was written by Alexandra Pecci, ’02