As part of this year’s May 15 Commencement Ceremonies, Northern Essex Community College President Lane Glenn conferred the rank of Emeritus Status on several long time members of the faculty and staff, who have recently retired. 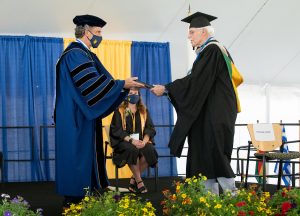 During his years at the college Fabbrucci worked for three presidents: John Dimitry, David Hartleb, and Lane Glenn.

In presenting the honor, President Glenn said “We all have very different styles, but one thing we had in common, was our reliance on and appreciation for Steve. No one in the community college system knew more about collective bargaining than Steve, and he was often tapped to provide leadership on this topic at the state level.” 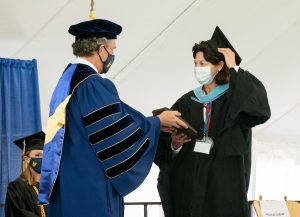 She joined the Early Childhood Education faculty in 1986 and has served as coordinator of that program since 2001, retiring in 2020.

Under Feigenbaum’s leadership, the Early Childhood Education Program filled a tremendous need in the community for qualified early childhood educators.

She expanded the program, making it more accessible, especially to people already working in the field who are looking for credentials.

Evening courses, online courses, and a certificate option have been added, and student diversity has been increased.

“If you visit any Early Childhood Center in the Merrimack Valley, it’s a given that you will meet passionate, caring teachers, who are Gail’s former students,” said Glenn.

She was an adjunct faculty member for 11 years before being named a full-time developmental writing faculty member and curriculum coordinator in 1998. She retired in 2020 after 33 years of service to the college.

“Her career has been dedicated to helping students become better writers, and successful student outcomes are the focus of everything that she does,” said Glenn.

“She has revised our curriculum more than once; piloted new ways of teaching and learning, such as learning communities and accelerated developmental courses; and been a mentor to other faculty.” 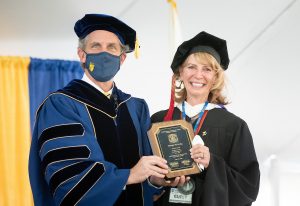 McCarthy began teaching College Reading, Philosophy, Logic and World Religions at Northern Essex in 1998 and she became a full-time developmental reading faculty member in 2001. She retired in 2020.

Successful reading skills are essential to success in most college courses, and Marilyn dedicated her career to giving her students the skills to become stronger readers.

She joined the college’s English faculty in 1983 and, for many years, she was chair of the department.

Suzanne was a gifted teacher, and she also made many contributions to the college. 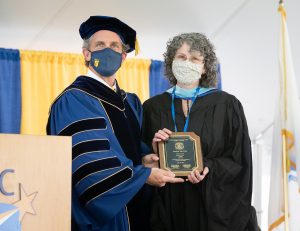 She led the institutional assessment of the six core academic skills, which were instituted in 2014, to ensure that students had the outcomes needed to succeed in further college studies or their careers.

She also was instrumental in building frameworks for learning assessment on campus, serving as co-chair of our Assessment of Student Learning Committee.