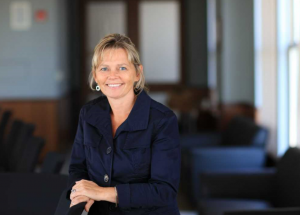 In September of 1987, Brenda Bond-Fortier ’89 stepped onto the NECC’s Haverhill campus for the first time, unaware of the fact that doing so would open the doors to a decades-long career as a nationally-recognized educator, advocate, and leading expert in organizational and police reform efforts.

At that time, the 18-year-old Bond-Fortier was simply acting on a whim.

“No one in my family had gone to college, so I knew little about college as an option,” she says.

She chose to pursue higher education after receiving a community service scholarship in high school. Northern Essex, with its abundance of affordable program offerings, felt like a good place to put that funding to use as she considered her career options. She selected criminal justice as a major based on a related class she had enjoyed toward the end of high school — and quickly became hooked on the subject matter.

“I knew as early as my first semester that [criminal justice] was the right choice. Those early classes, course readings, and discussions with classmates and faculty served as a launching pad for the rest of my academic and professional career. I fell in love with college and learning at NECC.”

Her love of learning, and her passion for her field, would eventually lead Bond-Fortier to earn a bachelor’s degree in criminal justice, a master’s degree in community social psychology, and a PhD in social policy. She took her knowledge first to area police organizations, where she coordinated research and development initiatives, and later to academia, where she has spent the past 14 years serving simultaneously as a professor in Suffolk University’s Master of Public Administration program, and as a writer and researcher of organizational reform efforts nationwide.

Bond-Fortier’s research includes studies exploring ways in which police organizations can work better with other community institutions to address the needs and concerns of residents. She recently published a book, “Organizational Change in an Urban Police Department: Innovating to Reform,” which expounds upon these concepts through a case study of a local police department’s reform efforts.

By sharing this work, she says that she hopes to foster “more and deeper dialogue between police and community that allows for greater understanding of history, experiences, fear, and hopes. We need reconciliation.”

Bond-Fortier describes herself as a teacher first, researcher second. Her goal throughout all that she does is ultimately to encourage and inspire a spirit of learning by working with others, and to learn from people in return — an objective that was largely inspired by her own journey as a first-generation college student at NECC.

On beginning her academic track at NECC, she expresses that she couldn’t be more appreciative.

“NECC introduced me to the world, and all the possibilities of my own potential. I am forever grateful for opening those doors.”