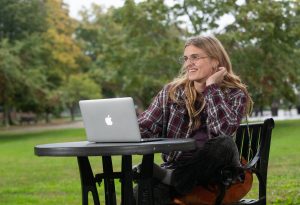 Gwynethe Glickman stars as Sugar in NECC’s production of “Tiny Beautiful Things”, Nov. 4-7, outside on the Haverhill Campus.

The Northern Essex Community College Performing Arts and Communication Department will bring “Tiny Beautiful Things”, a play based on a book by best-selling author Cheryl Strayed and adapted for the stage by actor, director, producer and screenwriter Nia Vardalos, to the Merrimack Valley, with outside socially-distanced performances on its Haverhill Campus, November 4, 6, and 7.

For two years, before she became a best-selling author in 2012, Cheryl Strayed was an advice columnist, responding anonymously to troubled readers as “Dear Sugar”, published on the Rumpus website. 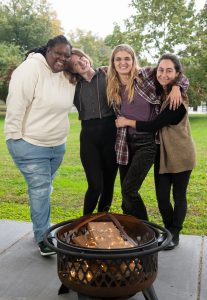 Soon after the popularity of her book “Wild: From Lost to Found on the Pacific Crest Trail” (2012), she published a second book “Tiny Beautiful Things: Advice on Love and Life from Dear Sugar” (2012), a collection of her advice columns.

The second book, in turn, became a play, which was adapted for the stage by Vardalos, best known for starring in and writing the romantic comedy film “My Big Fat Greek Wedding”, and premiered in New York in 2016.

Northern Essex Professor Brianne Beatrice, who is directing the performance, says this is a play for our times. “Some of the letters are heartbreaking, while others are funny. We all learn from and rejoice collectively in our power to push through the trauma and persevere.”

“While many of the discussions are dark, the play as a whole is uplifting,” says Beatrice. “It’s a story of triumph not defeat, and you will be laughing out loud at times.” 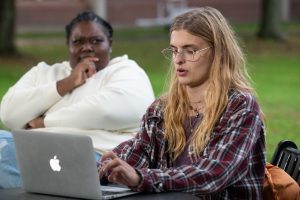 Because of the adult content, this show is recommended for ages 18-plus.

The show will be held in a grassy knoll in front of the library on the college’s Haverhill Campus, 100 Elliott St, Haverhill, MA. Hot chocolate, hot cider, and cider donuts will be available and there will be a limited number of heaters. In case of inclement weather, the performance will be held in the theater on the top floor of the Spurk Building on the Haverhill Campus, 100 Elliott St.