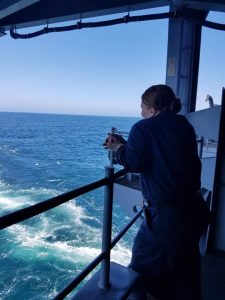 NECC Liberal Arts Student Crystal Chandler while at sea in the U.S. Navy.

Crystal Chandler of Haverhill, Northern Essex Community College Liberal Arts: Psychology major, joined the U.S. Navy in her early 20’s because she longed to experience life beyond her home state of Illinois.

Chandler served as an aviation boatswain’s mate-fuel, which she explains as being a mechanic responsible for the machines that take air craft fuel from the bottom of the ship to the flight deck. She worked nights, primarily at the very bottom of the ship, and says she was typically covered in grease and jet fuel.

Chandler served on three different aircraft carriers and spent most of her time at sea, including a trip around South America through the Straits of Magellan. A highlight was spending Thanksgiving at the Copacabana Beach in Rio de Janeiro, Brazil, she says.

Chandler is one of approximately 100 veterans who study each semester at Northern Essex. This year, the college was designated as a Military Friendly School by Viqtory, a national organization that connects veterans with civilian education, employment, and entrepreneurial opportunities. Institutions were selected based on public data sources and a comprehensive 15-page survey completed by the college. Over 1,200 schools participated and 747 earned the designation.

While in the service, Chandler married a Massachusetts native and had her first child, her now three-year old daughter. After finishing their service, the couple moved to Haverhill and her husband took a job at the Portsmouth Naval Shipyard. 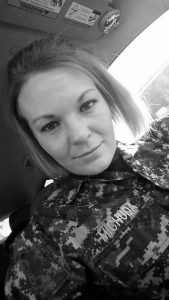 Focused on raising her daughter, Chandler decided to enroll at Northern Essex in the fall of 2019 and take advantage of her G.I. benefits, which cover tuition, textbooks, and other school supplies up to $1,000, as well as providing living expenses.

She started with evening classes to accommodate her husband’s work schedule, and then transitioned to online in the spring of 2020 when the pandemic hit.

Because social interaction is important to her, she says she will choose face-to-face classes in the spring, when the college expands its face-to-face offerings.

With a 3.6 GPA, Chandler is considering a career as a teacher and she plans to transfer to UMass Lowell after earning her associate degree from Northern Essex next year.

What she appreciates most about Northern Essex is “the flexibility of her professors.”

“My professors are so reasonable and personable,” she says. “They say ‘if you need more time, just let us know.’”

The Navy helped Chandler “learn what I really wanted to do with my life” and Northern Essex is helping her to reach those goals.

“I can’t imagine being anywhere else,” she says.