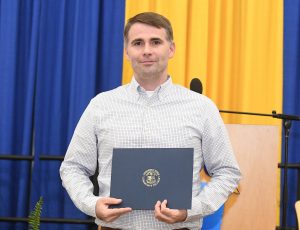 Nathan Samoisette of Georgetown, MA had been working in the medical field since graduating from Whittier Regional Vocational Technical High School in 2005, but he had never seriously considered continuing his education.

It wasn’t until a nursing manager pulled him aside and told him that he should go back to school that he decided to enroll at Northern Essex Community College, the first step in his journey toward a nursing degree, which he is earning with high honors in 2022.

“She told me that time would pass no matter what,” says Samoisette, “And that I had potential.”

Samoisette took it slow at first, enrolling in one course a semester. “I wanted to get into a routine,” he says. “Once I had confidence, I applied to the full-time nursing program.”

A once reluctant high school student, Samoisette thrived in the college environment, balancing a full-time job working the night shift as a CNA for Holy Family Hospital with full-time studies.

Sometimes he only got two to three hours of sleep a night, but he found a way to make it work, focusing on staying organized, doing things ahead of schedule if he had free time, and bringing his books with him everywhere so he could sneak in a few minutes to study when he had the opportunity.

Reflecting back after just having finished finals, Samoisette says the last two years were a blur. “It’s still surreal that I will be graduating,” he says. “At one point in my life, I thought I might be a CNA my entire career.”

Samoisette discovered that the emergency room was the right place for him during his clinical placements. When you consider that when he was younger he wanted to be a firefighter and loved watching Rescue 911, it all makes sense.

Samoisette will be taking his nursing boards in July and soon after that he hopes to be employed in the emergency room at Lawrence General Hospital.

Nursing runs in the Samoisette family. His brother, Matthew, graduated from Northern Essex with a certificate in Practical Nursing last summer and is now working in the field with plans to continue his education.

“It’s crazy that it’s over,” says Samoisette. “I want to start working and get to it!”

Learn more about the Nursing Program at Northern Essex.