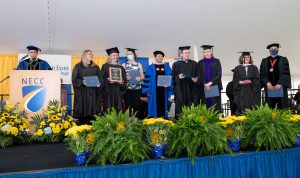 At the May 4 meeting, representatives of the English Language Learners Task Force presented the educational report, sharing what their group has accomplished since it was founded in the spring of 2021 to help address the needs of students who are non-native English speakers.

After surveying students, speaking with faculty and staff, researching best practices at other community colleges, and analyzing what the college is currently doing, the task force is implementing sustainable changes that will make all aspects of the English Language Learners’ experience at the college more successful. These changes touch all areas of the college, from curriculum to the enrollment process.

As Cameron explained, “There are English language learners in all classes at Northern Essex and we want to be sure they are being supported at all levels.”

The ELL Task Force was selected to receive the 2022 NECC Social Justice Award, which is presented each year at commencement.

Report of Board Committees

The budget is based on estimates regarding state appropriations, enrollments, staff and faculty salary and benefits, and grant support, as well as a $3.00 increase in college fees, both regular and allied health. It will be adjusted if any of these estimates doesn’t line up.

Trustee Pati Fernandez, chair of the Alumni and Advancement Committee, shared the results of the college’s First Annual Day of Giving, which raised $34,604 for the NECC Fund from 206 donors.

More than half of the donations were from faculty and staff; close to 30% from friends of the college and close to 20% from alumni.

Also, more than half were new donors. “We will focus on how to cultivate and keep them,” said Fernandez.

Five percent of donors were lapsed donors, meaning they had contributed to the NECC Fund in the past but not in the last five years.

“Kudos to Allison (Dolan-Wilson) and her team,” said Fernandez.

Report of the Administration

President Glenn reported that the college has received $10 million from the state to renovate two buildings on the Haverhill Campus: the Science (E) Building and the General Studies (B) Building.

In both buildings, doors, windows, floors, and railings will be replaced, electrical wiring will be updated, bathrooms and drinking foundations will be renovated and ADA Compliance issues will be addressed. There will also be improvements to the exterior of the buildings.

The college hasn’t been given a start date yet on the 12-month project.

On May 3, the EOHED (Executive Office of Housing and Economic Development) hosted an Employer Road Show on the Haverhill Campuses. One of 10 regional employer road shows, the goal was to connect employers to new and existing workforce supports. Both Mike Kennealy, secretary, Housing & Economic Development, and Rosalin Acosta, secretory, Labor and Workforce Development, attended.

Trustees voted unanimously to approve a full-year leave at half workload sabbatical for Professor Adrianna Holden-Gouveia from the STEM Division/CIS Department.

Professor Gouveia will be researching practical, low costs labs that can be created for NECC computer science students. As an example, President Glenn shared the idea of a doorbell that has a camera in it.