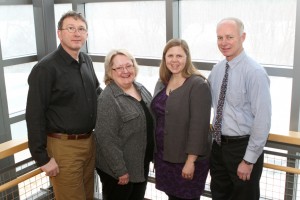 Cavan who has taught at Northern Essex since 2007 brings more than 25 years in a suburban Detroit police department to NECC. In addition to his extensive work experience, Professor Cavan holds both a bachelor’s and master’s in criminal justice from Michigan State.

While he loved working in criminal justice, he says, “It’s a young person’s game.” Now, he is happy to train the next generation. “I love the classroom. Working with the students is the best part of my job.”

He has served on several committees including the Academic Master Plan and the Emergency Preparedness Committee. He has participated in both the NECC Leadership Academy and the Chair Academy.

He was nominated by Chuck Phair, assistant dean, law, education and social profession, who noted he is respected by his colleagues, his students, and law enforcement officials in the field. “It is always a pleasure to work with Paul. He is someone I have come to rely on. I know that he cares about his program and his students,” wrote Phair.

Mathis was nominated by a number of faculty and staff in the Foundational Studies and Liberal Arts & Sciences Division who noted that when he assumed the role of chair in 2007, he did so displaying a “formidable intelligence, candor, fairness, deep commitment to students, hard work, and wit.” They wrote, “He has an ability to see the landscape of ideas in higher education and synthesize how they might or might not apply to our mission at NECC. “

A 10-year employee of NECC, Mathis earned a diploma in Arabic/Near Eastern studies from the Defense Language Institute in Monterey, CA, a Bachelor of Arts in English, a Bachelor of Science in education, and a Master of Art in English, all from the University of Rhode Island.

Morrow, who has worked at NECC since 2002, was also nominated by Phair who lauded her for providing leadership to her colleagues and students. She is highly respected by her peers for her knowledge, hard work and college service to NECC. This includes committee work in Writing Across the Curriculum, Teaching in Community and the newly formed Entrepreneurship Student Club, of which she is the advisor.

She has also participated in the Community College Leadership Academy and the Chair Academy.

“I have had many opportunities to work with Pat on many projects and know that she is committed to her program and students,” he wrote.

Morrow earned an Associate of Science in Liberal Studies from Middlesex Community College, a Bachelor of Arts in History and Women’s Studies from UMass Boston and a Masters in Management from Lesley University.

They noted that Yeager has been an integral part of the Northern Essex community since she started at NECC.

“Originally hired to teach earth science in 2003, she quickly mastered that role and has subsequently taken on a range of other increasingly challenging positions and responsibilities in her tenure,” they wrote. “She became one of the youngest department chairs at NECC in 2006. She also, completed NECC’s leadership academy.”

Yeager wrote a $75,000 Hewlett-Packard Grant and helped develop the college’s Lab Sciences Program, has taught NECC courses in South America, and assumed the role of Director of International Studies.

As one former student wrote “I have been consistently impressed with Marcy’s ability to inspire her students. Whether in a hut at 16,000 feet, trekking through the Amazonian jungle in Ecuador or in a community college classroom, Marcy always finds a way to connect with her students and really get them interested in even the most seemingly mundane topics … Her classes were by no means easy but she made herself available outside of class and was always willing to help students who were having.”