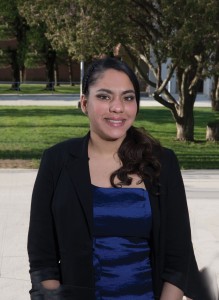 Lizmarie Peralta says Northern Essex is the cornerstone of her educational foundation; a foundation she continues to build upon as a transfer student at UMass Boston.

She credits the many support services at NECC with helping her grow academically and with preparing her to compete at NECC as well as at UMass Boston.

The Lawrence resident moved to Massachusetts from Puerto Rico to live with a family friend when she was just 17. Despite being unable to speak English, Lizmarie quickly assimilated to academic life at Lawrence High School, ranking top three in her class. She graduated in 2011 with a 4.0 GPA. Lizmarie was nominated for the NECC Presidential Scholar program, which includes a $1,000 scholarship. It is designed to attract motivated high school students.

Capable and curious, Lizmarie embraced college life both inside and outside the classroom. “I became really involved,” she said.

She joined the Student Leadership Program and Phi Beta Kappa – an academic honors society. Lizmarie also became involved with the Student Success Center (SSC) and the Pathways to Academic and Career Success (PACE) Program. She graduated with an Associate Degree in Liberal Arts in May of 2013 and earned the Foster Furcolo Scholarship which pays for tuition and most mandatory fees at UMass Boston.

“I believe that all the help I received through the PACE workshops and Student Success Center prepared me for life at a four-year school,” she says. “I always encourage my friends to enroll at Northern Essex. I tell them it gives you the building blocks to build a foundation to help you reach your goals.”

After she earns her bachelor’s degree in psychology, Lizmarie says she will continue on for her master’s and possibly medical school.

“Sometimes I think if I hadn’t attended NECC I wouldn’t have attended a four-year college,” she says.