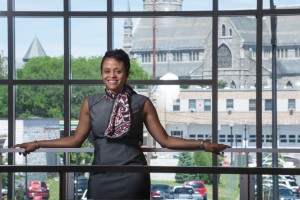 Dr. Noemi Custodia-Lora, a native of Puerto Rico and a scientist with a Ph.D. from Boston University, will be the new face of Northern Essex Community College in Lawrence.

Custodia-Lora joined Northern Essex in 2003 as a faculty member of the Natural Sciences Department. She taught Nutrition, Human Biology, and Anatomy & Physiology before becoming the coordinator of the Applied Sciences Associate Degree of Science in Lab Science Program which welcomed its first class in the fall of 2009. Developed in collaboration with area employers, this program provides three areas of study: biotechnology, chemical analysis, and environmental sciences, and has received the highest endorsement—a gold level—from the Massachusetts Life Science Education Consortium (MLSEC).

In 2011, she was appointed assistant dean of Foundational Studies and Liberal Arts & Sciences.

In addition, Custodia-Lora is a founding member of the ESL Social/Learning Club which is an initiative aimed at attracting more English as a Second Language students into the disciplines (and ultimately careers) of STEM.

A resident of Haverhill, Custodia-Lora just completed an academic year as an American Council on Education (ACE) Fellow – one of only 47 in the country and the only community college representative. For this past year, she has been “on loan” to Lesley University in Cambridge where she has worked on a number of special projects.

“I have consistently been impressed by Noemi, and I believe she is ideally suited to take on this new role,” said NECC President Lane Glenn. “She will be overseeing our expansion in Lawrence, forming new partnerships with community, government, education, and business leaders in the city, and participating in a number of economic development initiatives.”

Some of Custodia-Lora’s accomplishments, according to Glenn, include securing a $1.24 million grant from the Massachusetts Life Science Center to build and renovate science labs on both the Haverhill and Lawrence campuses; being the key architect in the creation of the college’s Applied Science Degree in Lab Science; and forging partnerships with public schools designed to promote science fields, especially among Latinos.

Over the past five years from the fall of 2008 to the fall of 2013, the number of Lawrence residents attending Northern Essex has increased 43* from 1,406 to 2,013. The college has expanded in the city in response to surging enrollments, opening the Dr. Ibrahim El-Hefni Allied Health & Technology Center on 414 Common Street last January and 420 Common St, a public/private partnership featuring a community bookstore, café, and bank as well as college classrooms.

Before joining the Northern Essex faculty in 2003, Noemi was a post-doctoral fellow at Tufts Medical School in Boston. She holds a bachelor’s in biology from the Universidad de Puerto Rico and a PhD in physiology-endocrinology from Boston University. She was raised in Puerto Rico but both her parents are from the Dominican Republic.

Dr. Custodia-Lora is eager to connect with Lawrence partners and can be reached at ncustodialora@necc.mass.edu.

With campuses in Haverhill and Lawrence Northern Essex Community College is a state-assisted college, offering over 70 associate degree and certificate programs as well as hundreds of noncredit courses designed for personal enrichment and career growth. More than 7,400 students are enrolled in credit associate degree and certificate programs on the Haverhill and Lawrence campuses; and another 6,700 take noncredit workforce development and community education classes on campus and at businesses and community sites across the Merrimack Valley. Northern Essex is the only state college located in the lower Merrimack Valley Region of Massachusetts. For more information, visit the website at www.necc.mass.edu.