New Lawrence Campus Leader Advocates for the College and the Community 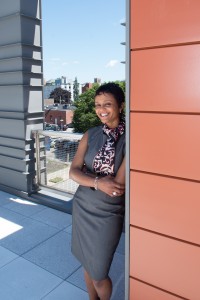 Dr. Noemi Custodia-Lora says she just might need to invest in a new pair of sneakers.

The sneakers, jokes NECC’s new director of the Lawrence campus and community relations, will keep her comfortable as she visits neighborhoods, schools, and businesses throughout the Merrimack Valley region promoting the virtues of the college’s ever-expanding Lawrence campus.

While the 43-year-old may not be completely serious about the purchase of a new pair of “kicks”, she is entirely serious about enthusiastically carrying out the college’s mission to continue to expand opportunities with regional partners including k-12, four-year colleges and universities, non-profits, businesses and city neighbors.

“I want to continue the work of transforming the Lawrence campus into becoming the number one choice for all high school students in the region,” she says. “We have a beautiful new health and technology building, great support for all students, and fantastic faculty – many of whom are leaders in their field.”

If she were less humble, Custodia-Lora would count herself among those faculty leaders. Prior to her recent appointment, she taught for eight years in the Natural Sciences department. She quickly became a destination class for students enrolling in Nutrition, Human Biology, and Anatomy & Physiology. Later, her star continued to rise as she took on the role of coordinator of the applied sciences associate degree of science program. That served as a springboard to her most recent position as assistant dean of Foundational Studies and Liberal Arts & Sciences overseeing the natural science and mathematics departments.

“Over the last few years, Dr. Custodia-Lora has been navigating the leadership ranks at NECC swiftly, transitioning from faculty member to program coordinator to assistant dean in short order and now director of the Lawrence Campus,” says Northern Essex President Lane Glenn.” She has done so as a result of her capabilities, her accomplishments, and the strong support she has from colleagues and other leaders at the institution, including me, who recognize that she will be a powerful contributor to this college, and likely to other colleges and higher education in general, in the years to come.”

In addition to her teaching, Custodia-Lora also founded the ESL Social Learning Club which is aimed at attracting more English as a Second Language (ESL) students into STEM programs.

The Puerto Rican native sees herself in many of these students. She was 24 with a Bachelor of Science degree in Biology from the Universidad de Puerto Rico, Rio Piedras when she arrived in Boston unable to speak English. In fact, her parents and most of her family, who have strong Dominican roots, still reside in Puerto Rico.

“I knew so little English that when I would read about “kidney” in my text books, I thought kidney was a man,” she laughs. “I knew, I had to learn the language.”

She completed an intensive English learning program at Harvard Extension School and then enrolled in Boston University’s physiology and endocrinology PhD program.

She was working as a post-doctoral fellow at Tufts Medical studying prostrate and mammary glands when she became pregnant with her first child and decided that working 12-hours shifts in a lab exposed to viruses wasn’t ideal.

Custodia-Lora applied for a position at NECC promising herself that she would “try it for one year”. She experienced a satisfaction standing at the front of a classroom that she says she never experienced in the medical lab.

“The more time I was in the classroom and the more time I spent with the students… the more I felt this is where I belong. I like to see the students’ eyes light up,” she says. “I like to make science interesting. For example I might explain the science behind dyeing your hair.”

Oddly, she never thought of herself as being an ESL student. It took Northern Essex ESL students to identify Custodia-Lora as one of their own. This opened her eyes. She saw herself through her students’ eyes as an ESL role model.

So, it was with some hesitation that she left the classroom to join the administration, but within six months, she says, she loved her new position as much as her old. She realized she could advocate for both the students and faculty in her role as administrator.

“I want everyone to understand the value of having an educational institution here in this city,” she says. “I also want to lead the work to showcase the campus and city’s multi-cultural composition which is currently predominantly Hispanic; let’s showcase and celebrate that.”

To that end, she says her plan is to start her tenure with a tour of the city, which brings us back to those sneakers.

“I am one who has to go and reach out. I will meet with people and tell them how great the college is. Hopefully I will make them comfortable speaking in their own language,” she says.

The Haverhill resident says she is a role model at work and at home where she and her husband Donald, a chemist she met over mutant mice at a molecular biology camp on Mount Desert Island, are raising their two daughters. As fate would have it, her father-in-law John Mason was a longtime science professor at NECC.

When she is not walking through her garden barefoot and engaging in a yoga pose competition with her girls, Custodia-Lora can be found at the stove cooking with spices and authentic recipes she has collected from around the world. Nigella sativa has her latest interest. What started as a way to address her daughter’s food allergies has become an avocation.

Whether she is in the classroom, the boardroom, or the kitchen, one thing is certain – her dad’s voice is always in her ear. A math phenom, she says, he didn’t finish school instead working the family farm.

“I think about my dad…he always said to me ‘I want you to go to school…you want to have a better life.’ ”