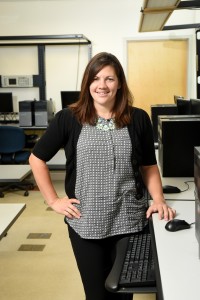 When the family, friends, and colleagues of the late Kathy Proietti, a native of Haverhill, long-time resident of Sandown, NH, and an alumna and beloved computer science professor at NECC, wrote the criteria for her memorial scholarship, Samantha Romano was just the type of recipient they had in mind.

Romano, a current computer & information sciences student, and Proietti not only shared a calling to computer science, but a sticktuitiveness that others may never know. Romano is a student Proietti would have enjoyed teaching and mentoring said her husband, retired NECC professor Steve Proietti.

A Kingston, NH, resident, Romano holds a 4.0 GPA. Her academic excellence has actually earned her two scholarships – the Proietti Scholarship and the NECC Administrators’ Association Scholarship. She was one of 190 NECC students awarded 222 scholarships totaling more than $200,000 for the 2015/2016 academic year.

The 27 year-old Romano graduated from Sanborn Regional High School in 2006 where she was a three-sport athlete. Her athleticism led her to study physical science at Plymouth State University. She earned her bachelor’s degree in 2010 and launched into personal training which she found less than fulfilling.

Eventually she went to work for a day-program designed for adults with disabilities, a job she found quite fulfilling. After five years however, she realized she wanted a stronger career trajectory. With a dad who worked as a systems engineer, Romano says, there was always new technology in the home which she embraced. She started imagining a return to college for a computer science degree.

Dad’s advice to her was to enroll in one or two computer classes to see if she liked it. She followed his guidance and after just one class thought “Why didn’t I do this sooner?”

In addition to being a full-time student, Romano continues to work 30 to 35 hours a week with disabled adults, is a note-taker for a learning accommodations student at NECC, teaches as a Supplemental Instructor in NECC’s computer & information sciences program, and will start an internship through NECC’s internship program at Rmon Networks, Inc in Plaistow, NH, in the fall.

“I love everything I’m doing,” she says. “There is always a challenge.”

Now, instead of competing on the softball or field hockey fields or basketball court, she competes with herself to see how quickly and accurately she can solve a computer problem. “There is always a different way to find an answer.”

Romano, who will graduate next May with an Associate of Science Degree in Computer  & Information Sciences: Information Technology and two certificates in Computer Security and Computer Networking, says she was delighted to receive both scholarships.

“Receiving two scholarships is beyond what I had ever expected,” she said. “Receiving both scholarships allows me to focus more on school work rather than working extra hours to make my school payments throughout the semester.”

She was recommended for scholarships by her program advisor and Computer Science Professor Adrianna Holden-Gouveia who wrote, “Samantha has not only demonstrated technical talent and a very strong work ethic, but she also has the communication and soft skills that will clearly make her excel at everything she does.  She is always working on learning new things, understanding the things she already knows, and sharing that knowledge with other students.

In 2002, Proietti was recognized as one of 40 distinguished alumni during NECC’s 40th anniversary. She received an honorary high school diploma from the City of Haverhill, and was the only NECC professor to receive the national honor  – the David R. Pierce Technical Educator of the Year Award through the American Association of Community Colleges. These were just a few of her accomplishments.

Like Romano, Proietti well understood the importance of an education. Proietti had dropped out of high school in her sophomore year, but later earned her GED, an associate degree from NECC, and a bachelor’s degree all within three years. She went on to earn a master’s degree and was an ally and advocate for continued education for all. She worked in a number of capacities throughout her early years at NECC, eventually teaching full time, serving as chair of the Computer Science Department, and then as assistant dean of her division.

“In all her various positions that she held at NECC, she was always student-centered,” said her husband.

“She left school and then returned,” says Romano. “I feel like I can relate to her hard work. She never gave up.”

Samantha is not the only Romano to attend NECC. Her older sister and mom both graduated from Northern Essex.

“My experience at Northern Essex has been phenomenal,” she says. “Faculty have been so supportive and interested in how I learn.”