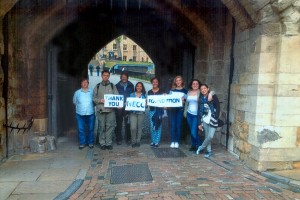 When Northern Essex Community College Professor Barbara Stachniewicz reviews Geoffrey Chaucer’s “The Canterbury Tales” in her British Literature class this fall, she will share her own tales of Canterbury.

Canterbury was just one of the literary destinations for Stachniewicz and seven NECC students who participated in the short-term study abroad program this summer. In addition to Canterbury, they toured other noted literary sites including London, Stratford-upon- Avon, and Bath, England for her course “International Experience in Literature”.

Stachniewicz was one of three professors to teach courses this summer in NECC’s increasingly popular short-term study abroad program. While she was in Great Britain, on another continent, Marcy Yeager, director of the NECC International Studies and co-instructor of “Field Studies” along with NECC Professor Ken Thomas, were traveling through Ecuador with 10 NECC students to study the biological and geological connection between the Andes Mountains and the tropical rain forest.

The courses, funded in part by the NECC Foundation, will serve as a literature and science electives respectively. Both courses met for several Saturday mornings before the end of the school year in early May. As part of the literature curriculum each student researched one of the venues they would be touring and presented to the class. In preparation for the visit to Stratford-upon-Avon birthplace of William Shakespeare they read his “The Merchant of Venice”, and for the Canterbury Cathedral in Kent, they read “Canterbury Tales”. 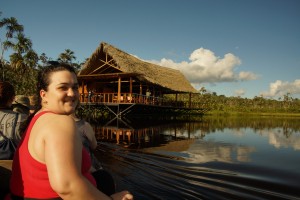 Tarah MacGregor arriving at Sacha Lodge in the Ecuadorian rainforest, for the first time.

Once in Ecuador the students put their hypotheses to the test as they physically explored each ecosystem they previously researched and analyzed. Students visited Quito, the capitol of Ecuador, the hot springs at Termas Papallacta, the bird sanctuary in Baeza, the Napo River, spent five days in the heart of the Amazon rainforest, and climbed the slopes of Cotopaxi the world’s highest active.

Across the world, in England, NECC students rode the London Eye, toured the Tower of London, Trafalgar Square, The Chaucer Museum, the Canterbury Cathedral, The Jane Austen Center and the Roman Baths. They had tea in Bath’s famed Pump Room and danced in the Assembly Rooms of the Fashion Museum.

All students were required to keep a travelogue. Both courses culminated in a writing project.

These short-term study abroad programs are designed for students, who for financial or family reasons, cannot study abroad for a full year or even a semester.  Each trip is approximately 10 days in length. Students enroll in an NECC course and meet on several occasions (usually Saturdays) before departure and at least once on return to the U.S. While abroad, lectures and field trips will occupy part of each day. While students will have some free time to explore on their own, these trips are designed to be academic experiences, not vacations. 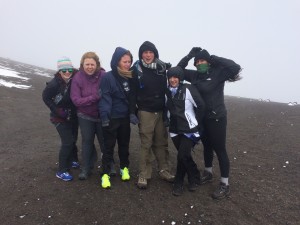 Participants in the NECC short-term study abroad program who participated in the trip to Ecuador, had the thrill of a life time on the slopes of Cotopaxi – the world’s highest active volcano. From left to right are Ericka Akerman, Marcy Yeager, Marguerite Fijux, Thomas Ferris, Tina McNeil, and Keisha Oleaga.

Past short-term trips included Italy and Belize. Next year’s trips are to The Azores and Italy.

The cost runs between $3300 and $5000 depending on the length. Financial aid can used to help support these courses.

The trips are usually planned for the end of May, right after graduation. In the future, trips may also take place in January during the semester break and in March during the spring vacation.

For additional information on all study abroad programs contact Marcy Yeager by email at myeager@necc.mass.edu. Or visit the NECC Study Abroad website.