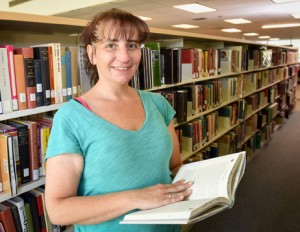 Erin Ring returned to Northern Essex to finish what she started 20 years ago.

Nearly 20 years ago, when Erin Ring left Northern Essex Community College’s nursing program due to health issues, she promised herself that one day she would return. Her “one day” starts in September when she begins the nursing program funded in part by a Women of NECC Scholarship.

“Without the help of the Women of NECC scholarship, the financial burden of attending college would be too great to bear,” Ring said. “I am truly grateful for the opportunity I am receiving.”

A 1993 graduate of Andover High School, Ring enrolled at NECC, completed all the prerequisite nursing courses and was accepted into the competitive nursing program. When she left the program, no one was more disappointed than Ring herself.  She vowed she would return to the associate degree nursing program.

As the years passed, Ring, a single parent, supported her little family surviving from one paycheck to the next.

“It had been so long since I had been in school,” she said. “I had no plan. I just knew the path I was on wasn’t ideal for my family.”

When her oldest child turned 20, Ring encouraged her to enroll at NECC. She accompanied her daughter to the admissions office and while she was there, inquired about her own college credits. Ring was delighted to learn she would only need to retake her science classes to reapply to the nursing program.

So Ring, despite her “huge fear of failure” got to work and enrolled in a math course and science course.

“I hadn’t been a student in 20 years. I didn’t know if I was capable of adapting to new technology,” she said.

Not only was she capable. She was a natural. Once Ring started enrolling in classes, she didn’t stop. At times, she and her daughter were enrolled in the same classes.

“She told me I inspired her and that she never would have succeeded at Northern Essex if I hadn’t pushed her to enroll,” she said. “But that cuts both ways. I never would have picked up the phone to check on my college credits.”

With her prerequisites once again completed, Ring along with her 3.5 GPA, has her NECC nursing uniform ironed and is prepped to begin.

Getting this far hasn’t been easy. There was her eight-year-old, 10-month old, and her fiancée to consider with every decision. But the family understands her education is all for the greater good.

Ultimately Ring believes she may gravitate toward hospice nursing.

“When my mom was dying, I witnessed the nurses caring for her and the comfort they brought to her and the entire family,” she said. “I don’t remember the doctors who cared for her, but I remember every nurse.”