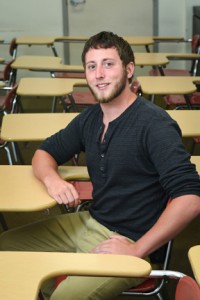 One of the most important lessons Jacob Barry of Andover learned at NECC is that he is a good student.

When Jacob Barry graduated from Andover High School four years ago he knew he wasn’t ready for college. But a lot changed in four years and now the 22-year-old is excelling at Northern Essex Community College where he recently received the Raney Family Memorial Scholarship.

“It felt good to be rewarded for getting good grades,” he says. “It helps me financially to be able to continue with school.”

His academic about-face is quite an accomplishment for a young man who says studying was not a high priority as a high school student. Friends and fun came first, he says, which didn’t leave him with many options following graduation. For a time he considered the military, but eventually went to work for his dad’s landscaping business.

After a few years of hard work and self-reflection, Barry was ready to challenge himself – but how? Wistfully, he remembered visiting the NECC campus as a day camper in NECC’s College for Kids summer program while his mom, attended graphic design classes. When his mom died in 2004 of Non-Hodgkin’s Lymphoma, the magical life his mom had created for the two of them dissolved and Barry went to live with his dad and started a new child/parent relationship.

Barry believes his mom would be pleased with his decision to attend NECC. He knows he is. After completing the EMT class and earning good grades, Barry decided it was time to work toward a degree. More specifically, a liberal arts degree. A degree that would allow him to explore different disciplines.

His American Literature professor Joe LeBlanc recognized his commitment to education. He nominated him for a scholarship, writing, “This is no ordinary student. Jacob thinks critically and reads and listens perceptively. He writes with increasing confidence. He speaks well and participates actively in class. His comments about ‘Long Day’s Journey into Night’ were thoughtful and some of the most eloquent I’ve encountered in years. His late mother inspires Jacob…Her effort to return to college motivates him.   “

Barry was so pleased with his experience at Northern Essex he talked his best childhood friend into enrolling too. In high school one would talk the other into skipping class. At NECC they competed against each other for better grades. Barry also convinced his girlfriend into attending Northern Essex.

He is on track to graduate from NECC in May of 2016 and intends to transfer to a four-year college and earn both a bachelor’s and master’s degrees.

The Raney Family Memorial Scholarship honors the late Margaret Raney, a long-time, beloved faculty member in the college’s Business Division, and her son Joseph Raney. This scholarship is awarded to a student studying Business or Liberal Arts.