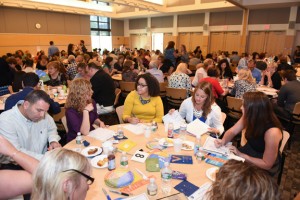 It was a crowded convocation as faculty and staff came together for the being of the 2015/2016 academic year.

DIY or Do It Yourself projects was the lead into the Tuesday, September 8, fall convocation.

As hundreds of faculty, staff, and invited guests filled the David Hartleb Technology center carrying plates of fresh fruit, scones, and bagels, President Lane Glenn asked the crowd if anyone had started or completed a DIY project over the summer break.

Sarah Courchesne, a natural science faculty member, volunteered that she spent part of the summer knitting a wool sweater at her son’s request for the first day of school which broke a record for its 95-degree weather. Nursing faculty member Jaime McLennan planned her summer wedding for 116 guests, Gretchyn Gallagher from developmental studies, re-purposed a small room in her house as a designated study area.

President Glenn noted that like all of the mixed talent in the room, NECC, as a college, has its own talents and has accomplished amazing projects over the last few months with more underway.

President Glenn introduced several new faculty and staff before turning over the program to Bill Heineman, dean of academic and student affairs, who shared that his family had vacationed in Chicago. He joked that shopping was his two daughters’ DIY project. Heineman went on to give a synopsis of Northern Essex’s recent academic affairs activities. He said that NECC has “seriously ramped up the work dedicated to student assessment.” The academic area is also developing a “math first” program that will require students to enroll in a math course their first semester instead of allowing them to defer the classes until their last semesters. The department is also exploring creating a “bigger, better, intercession” of classes. This is expanding upon a program launched last January between the fall and spring semesters.

English Professor Clare Ostrander and Aaron Moreno, assistant professor of developmental writing in academic preparation, told their colleagues about a new online, interactive writing site titled The Writing Project that they designed over the summer. They invited everyone to participate in its 100-word essay challenge. They suggested the new site could be used across the curriculum to encourage writing. 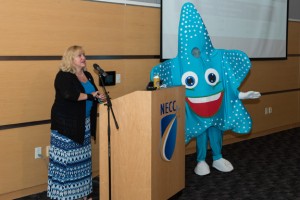 Dawna Perez explains that the Starfish Student Success Program will now be available to all students.

With a starfish mascot circling the room, Dawna Perez, dean of student success, announced that starting this semester, all students will be connected to the Starfish Early Success Program, designed to give faculty a way of alerting or flagging a student who is in academic distress. Faculty will be able to easily connect with academically struggling students. Last year’s pilot of six groups of Latinos students showed an 11.3% higher course completion and 19% higher retention rates than Latinos not using the services.

President Glenn noted that there are many ways of measuring student success, and, according to Achieving the Dream, a national initiative to help more community college students achieve success, Northern Essex is making progress. President Glenn reported that last fall NECC’s overall course completion rate had improved to more than 73%, the highest completion rate on record. As a side note, NECC has established a target of 76% for the fall of 2016.

In addition, he noted that NECC is a system-wide leader in closing achievement gaps for students of color and low-income students. With 37% Latino students, NECC has the highest percentage of Latinos of any community college in the state, a proportion that significantly exceeds regional demographics.

President Glenn shared that Spurk Building renovations can now be followed at a dedicated website.

He also reported that the Louise Haffner Fournier Education Center building on Amesbury Street in Lawrence has been gifted to the state to be used by the college.  The building has a $1,450,000 value and it was gifted by the EMLO Realty Trust.  NECC has leased the building for many years.

He pointed out a series of successful, strategic new and existing private/public partnerships including the opening of The Hub at 420 Common St. in Lawrence and the new NECC/Methuen Police Academy on the Haverhill campus. The college’s Haverhill campus is also now the training site for the Essex County Sheriff Departments corrections recruits. 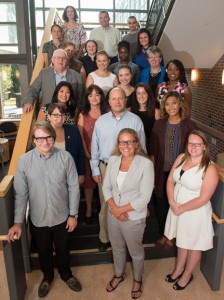 Attendees participated in a strategic plan inquiry. Working in teams of two and three they identified strategic goals they would like to see continued, enhanced, or developed at Northern Essex. The facilitator from each table will take the results and compile a report that will be available at a later date. 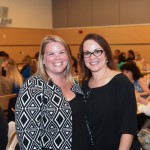 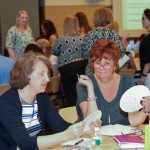 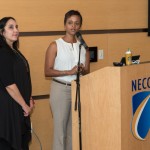 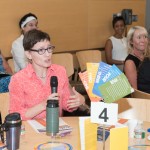 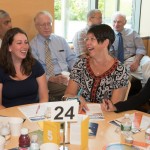 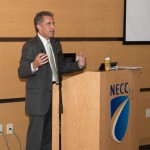 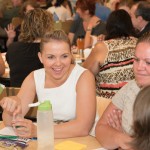 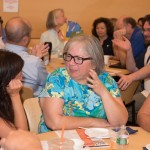 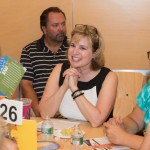