On Thursday, Oct. 1, Northern Essex Community College, in partnership with the Buttonwoods Museum, hosted a celebration of the Archie comic strip and its connection to Haverhill. 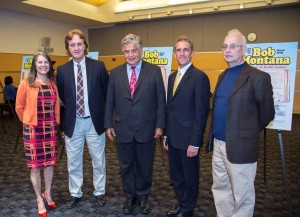 Shown left to right in the photo are Nancy Silberkleit, co-CEO of Archie Comics; Jeff Linehan, NECC Board of Trustees and Buttonwoods Board; Haverhill Mayor Jim Fiorentini; NECC President Lane Glenn; and Gerry Peary, writer and director of “Archie’s Betty”.

Just about every seat was filled at both screenings of “Archie’s Betty”, a documentary film that explores Archie’s Haverhill roots, and an exhibit of the original Archie comic strip artwork drawn by Bob Montana on display in the NECC Linda Hummel-Shea ArtSpace, was well attended.

Bob Montana, the artist who created the Archie comic strip, spent his high school years in Haverhill, and it’s widely recognized that many of his characters, settings, and story lines are based on his observations and experiences while a student at Haverhill High School during the late 1930’s.

While introducing the film, Gerry Peary, director and writer, reported that Montana once said that “everything that happened to Archie happened to me in Haverhill.”

“Haverhill is the friendliest, nicest town,” said Peary, a resident of Cambridge, MA, who has spent many hours in Haverhill over the years conducting interviews.  “There’s a reason Bob Montana mythologized it in the Archie comic strip.”

Haverhill Mayor Jim Fiorentini also spoke, suggesting that the city needed to do more to honor its connection with Bob Montana and the Archie comic strip.  The mayor announced that he and his staff will explore the feasibility of installing a plaque at 32 Sheridan St, where Montana and his family lived in the late 1930’s in a second floor apartment.

Peary dedicated the screenings to Jane (Donahue) Murphy, who attended the prom with Bob Montana, while they were both students at Haverhill High School.  Murphy attended both screenings and was prominently featured in the film, sharing her impressions of Montana and speculation about which of her high school classmates inspired each of the Archie characters.

Special guests attending the celebration included Nancy Silberkleit, co-CEO of Archie comics; Lynn Montana, Bob Montana’s daughter; Shaun Clancy, co-producer of “Archie’s Betty”; and Jeff Linehan, who serves on the board of Northern Essex and the Buttonwoods, and whose father “Skinny” Linehan was the inspiration for Archie’s Jughead.

Bob Montana (1920-1975) was born in Stockton, California, the son of ex-Ziegfeld girl Roberta Pandolfini Montana and Ray Montana, a banjo player on the vaudeville circuit.   He spent his childhood traveling, receiving his schooling backstage in theater dressing rooms.  After his father died, his mother remarried and he moved to Haverhill, where his stepfather managed Hooker Howe, a theatrical costume shop.

At Haverhill High School from 1936 to 1939, Montana entertained classmates with his cartoon drawings and served on the staff of the Brown & Gold, the high school newspaper.

He moved to Manchester, NH during his senior year, graduating from Central High in 1940. 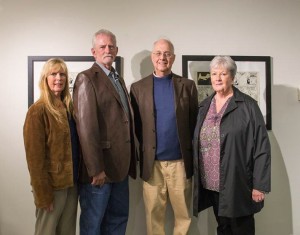 After high school he enrolled in the Phoenix Art Institute in New York City and began doing freelance work for a number of comic book publishers.  John Goldwater, publisher of MLJ Comics, asked him to work up a high-school comic feature, which was how “Archie” was started.  The first “Archie” comic appeared in the fall of 1941, and, except for a four-year stint in the US Army, Montana drew the daily comic strip until 1975, when he died of a heart attack near his home in Meredith, New Hampshire.

The exhibit of original comic strip artwork will be on display in the ArtSpace through the month of October.  The artwork belongs to comic art collector Shaun Clancy, a native of Lawrence with strong family connections to Haverhill, who is now living in Washington State.

Since learning about Bob Montana’s connections to Haverhill, Clancy has researched the subject extensively and he co-produced “Archie’s Betty”.  Clancy has documented close to 50 direct references to Haverhill in Bob Montana’s comic strips, including mentions of the Haverhill Armory, the Strand movie theater, the Hooker Howe Costume store, the Thinker statue located in front of the High School; and the Brown & Gold, the Haverhill High School newspaper.

Gallery hours are Monday through Thursday 2 p.m. to 9 p.m. and Friday, 2 p.m. to 5 p.m.  The ArtSpace is located in the Bentley Library on Northern Essex Community College’s Haverhill Campus, 100 Elliott St., Haverhill, MA. 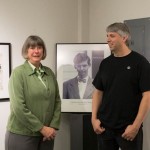 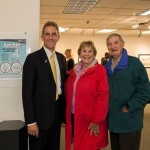 NECC President Lane Glenn with Dolores and Bill Nofsker. Bill is a former member of the college’s Board of Trustees. 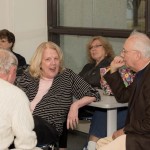 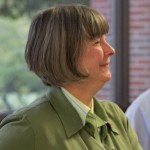 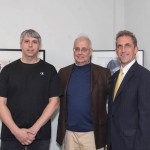 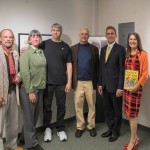 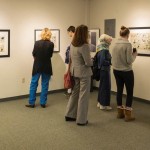 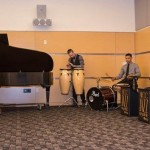 The NECC Jazz Ensemble entertained the audience with jazz standards.