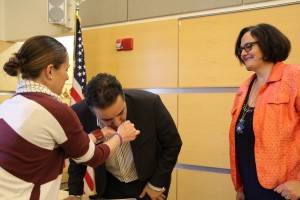 There was a strong turnout at the NECC Professional Association (NECCPA) meeting on Wednesday, April 27, in large part because the agenda included a kiss between Math Professor Habib Maagoul and an American toad.

Maagoul was the “winner” of the recent Kiss the Frog fundraiser, which raised over $1500 for student scholarships.

Just before the kiss was scheduled, the toad began singing what may have been the American toad mating song.

As Kortz held the toad, Maagoul bent down and touched his lips to the toad, proving, according to Professor Trish Schade, that “our faculty will go to any lengths to support student success.”

Five NECC faculty members vied for the opportunity to kiss the frog including Behavioral Sciences Professor Peter Flynn, Philosophy Professor Meredith Gunning, Natural Sciences Professor Ken Thomas, and Developmental Reading Professor and Reading Lab Coordinator, Linda Giampa.  Faculty, staff, and students who donated to the campaign were asked to choose who they would most like to see kiss the frog.  Maagoul—with $500 in donations—was the winner.

This year’s NECCPA scholarship for $1000 was awarded to Anthony Delgado of Lawrence, who has a perfect 4.0 average and will graduate with a degree in liberal arts on May 21. 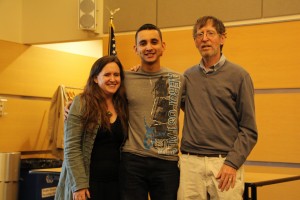 Delgado balances full-time work as a manager at McDonald’s with full-time studies.   He also is active on campus, participating in PACE (Pathways to Academic & Career Excellence) and the Student Leadership Program.  A supplemental instruction leader, he plans to continue his studies in mathematics and has been accepted to UMass Lowell and the Rochester Institute of Technology.  He has plans to pursue a PhD in mathematics.  Delgado was nominated by Professor Meredith Gunning and Steven Slaner, chair of the Global Studies Department.