First Year is the Charm for NECC Softball Coach 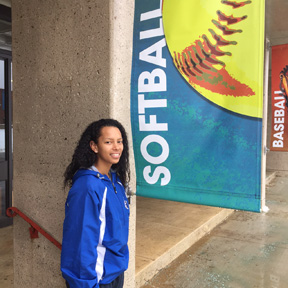 Northern Essex Community College’s first-year head softball coach Kendra Hobbs sure knows how to make a name for herself. She was recently named the National Junior College Athletic Association (NJCAA) Region XXI Coach of the Year.

Hobbs led the team, in just its second year as a varsity program, to a 14-11 record and a third place finish in the NJCAA Region XV tournament in Westchester, NY.

The award goes to one coach in the New England Region and includes all divisions (Division I, II, and III).

The 24-year-old Haverhill resident served as NECC’s assistant softball coach for the last two seasons when the softball team was revitalized under Coach Robert Gillespie. He recently resigned to become softball coach at Newburyport High School.

She is a 2009 Whittier Regional Vocational Technical High School graduate where she was a star softball player. In 2013, she graduated from the Massachusetts College of Liberal Arts where she studied biology and was a valued member of both the softball and volleyball teams.

“We are very fortunate to have had Kendra on our staff. Kendra has done an exceptional job with this team and has really made a difference,” said NECC Athletic Director Sue MacAvoy.

At the start of the season, Hobbs was hoping to take the team to the state championship, which is exactly what she did.

For additional information on the NECC softball team, contact Coach Hobbs at khobbs@necc.mass.edu or MacAvoy at smacavoy@necc.mass.edu