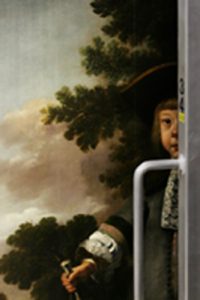 A photo, titled “A deathless contract” which shows Dutch Golden Age portrait painter Jan Albertsz Rootius’s “Portrait of a Boy” in storage at Boston’s MFA, is part of a new multi-media exhibit at the NECC Linda Hummel-Shea ArtSpace on the Haverhill campus.

Since 1911, a collection of 17 paintings valued in excess of $20 million has hung in a basement storage room of the Museum of Fine Arts in Boston. This collection, last owned by a Lawrence minister, is the subject of a multi-media exhibit titled “The Reverend, His Lover, Their Monet, and The Museum,” created by Danville, NH, artist Cathy McLaurin.

The exhibit will run from September 9 through October 14, at Northern Essex Community College’s Linda Hummel-Shea ArtSpace Gallery on the Haverhill campus, 100 Elliott St.

The unusual and complicated story of these paintings, which includes Claude Monet’s “Field of Poppies near Giverny,” which were last owned and bequeathed by the Reverend William Wolcott, is told through this exhibit using video, animation, photographs, text works, and performance.

A native of Silk Hope, North Carolina, McLaurin says the exhibit is rooted in “archival research”. 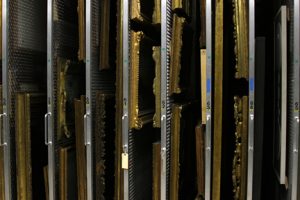 Another of McLaurin’s pieces show the Wolcott paintings in storage at the MFA.

“I am fascinated and confounded by a story that combines art, history, legend and finances in what is known as “The Immigrant City,” she says.

When creating the exhibit, McLaurin considered the “personal and professional legacy” of Wolcott who was born in Belchertown, Mass. in 1852. The son of Dr. Samuel Wolcott and brother of Senator Edward O. Wolcott, who bequeathed the paintings to this brother, he attended Oberlin College and later Andover Theological Seminary in 1881. Wolcott was pastor of the Riverside Congregational Church for three years and then became the pastor of the Lawrence Street Congregational Church until his death May 12, 1911.  Wolcott willed the 17 paintings to the White Fund with the intent to provide a suitable gallery in Lawrence for the local appreciation of them. Until a safe place to store the paintings could be built in Lawrence, Wolcott asked that the paintings be held at the Museum of Fine Arts in Boston for public exhibit. In 2007, they returned to the Merrimack Valley for the first time in 100 years when they were displayed at the Addison Gallery at Phillip’s Academy in Andover.

“This project examines the ways in which the intersection of his (Wolcott’s) philanthropic desires conflict with the institutions that have become the guardians of his legacy,” says McLaurin.

“‘The Reverend, His Lover, Their Monet, and The Museum’ considers art as currency, asking questions about the value of art.  When does this art gain value?  What value?  Whose values?” says McLaurin. “The White Fund paintings have acquired a monetary patina or aura that frequently surrounds western art. I propose that they have also taken on an aura of controversy.  How are these art works altered by controversy?  How does that controversy alter the way in which we consume them? I engage in an investigative art practice in which research operates as both content and form.”

In 2013, McLaurin earned a Master of Fine Arts degree in interdisciplinary practice from the School of the Museum of Fine Arts, Boston/Tufts University. She graduated in 1989 from Meredith College, Raleigh, NC, with a bachelor of the arts with a concentration in studio art.

She has exhibited at numerous galleries including the Intergalactic Arts Collective, Toronto, Canada; the Power Plant Gallery, Durham, NC; the Mills Gallery in Boston; and the Boston Center for the Arts.

This exhibit is sponsored by the Art Department & the NECC Foundation. The exhibits featured in the Linda Hummel-Shea ArtSpace Gallery express the views of the artists. They do not necessarily reflect the views or policies of Northern Essex Community College.

NECC offers an associate degree in general studies: art which provides a two-year degree with a focus on specific area of the arts, such as fine arts, multi-media, photography, or visual communications.

For additional information contact Patricia Kidney at pkidney@necc.mass.edu or Marc Mannheimer at mmannheimer@necc.mass.edu