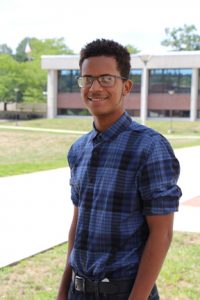 Growing up in the Dominican Republic Maireny Rodriguez would tie together cables from broken electronic devices hoping a robot would emerge. While a robot never materialized, a personal devotion to technology did.

A devotion that led the Lawrence resident to the engineering classrooms of Northern Essex Community College where he carries a 3.8 GPA as an  engineering science major. For his accomplishments, he recently received the Gannett, Welsh & Kotler, LLC Scholarship of $1,000.

“This scholarship helps me to achieve my short-term goals,” he said. “I can stay focused on my studies and not have to worry about how to pay for my books.”

Rodriguez says he started formulating his goals when he was admitted to vocational high school in the Dominican Republic. The three years he spent there convinced him to pursue a career as an engineer. His plan was only slightly interrupted by a move to the United States in 2014 just as he was about to start senior year.

After completing English as a Second Language classes, he graduated from Lawrence High School’s Business, Management, and Finance Academy as an honors student. Mildly obsessive about earning A’s in high school, Rodriguez toned it down when he enrolled at Northern Essex so he could enjoy his “college experience”.

As a young, male Dominican he takes his position as a role model seriously and has embraced the community college experience. After graduating from LHS, in preparation for college, he was enrolled in the Bridge Program through NECC’s Student Success Center. Last year he was a member of the Tertulias Club and Pathways to Academic Excellence (PACE) Program. This year he plans to run for NECC’s Student Senate.

“He is an individual who has great motivation not only for himself, but for the ones around him,” wrote Jeidy Urena, his Student Success Coach, in a recommendation letter for Rodriguez. “He is very well prepared for this journey and is willing to work extremely hard.”

“A college education is pretty expensive,” he said. “But it is an investment in life that I’m pretty sure is going to be worthwhile in the end.”