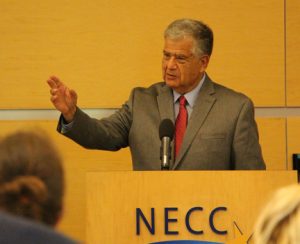 Haverhill Mayor Jim Fiorentini spoke at an NECC Election Teach-In event titled, “Why Should I Vote”.

The year was 1968 and Haverhill Mayor Jim Fiorentini turned 21 – the then legal age to register to vote. Unfortunately, his birthday fell on Easter Sunday, so he had to wait to register, but register he did. He has exercised his right to vote ever since, he told a room full of Northern Essex Community College students, staff, and faculty on Monday morning in the Hartleb Technology Center on the Haverhill campus.

Fiorentini spoke as part of Northern Essex’s “Election Teach-In”, a state-wide effort to educate students on the importance of the presidential election and why their vote matters. For the month of October, a series of events will be presented designed to educate the college community about the election and election issues.

The seven-term mayor, who NECC President Lane Glenn introduced as one of the most successful politicians in the Commonwealth, was addressing the issue of “Why Should I Vote”.

Back in 1968, Fiorentini said, the country was dealing with the Vietnam War, the assassinations of Bobby Kennedy and Martin Luther King, and the civil rights movement.

“We may not have the same issues today, but we have other issues to consider,” he said.

College affordability, the legalization of marijuana, the national infrastructure, the estate taxes, and federal income taxes are all part of today’s political conversation, he said. These are just a few of the issues voters should be educating themselves on.

“There is no such thing (for a registered voter) as not participating in an election,” he said. “You participate by not voting.”

He encouraged the attendees to register to vote and join a particular party and go to political rallies.

“Politics needs to be fun again,” He said. “Put a bumper sticker on your car or a sign on your lawn.”

He said the political conversations are playing out on social media instead of in person at political rallies.

“On election day vote what you think is right for yourself and for America,” Fiorentini encouraged. “Vote on the issues and ignore the noise.”

The 2016 Election Teach-In is part of a state-wide effort to educate students on the importance of the election and why their vote matters.  It is supported by the Contemporary Affairs Club, the Global Studies Department, and Civic Engagement and Service-Learning.