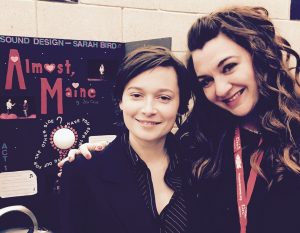 A group of Northern Essex Community College theater students and faculty received rave reviews at the Kennedy Center American College Theater Festival for Region 1, which took place at Western Connecticut State University from Jan. 31 to Feb. 4. The festival brings together students from the six New England states and northeastern New York, where they’re invited to “show their stuff” in various theater competencies like acting, lighting, sound design and playwriting.

For the first time in the college’s history, a student advanced to the final round of the sound design exhibition. That student was theater major Sarah Bird, of Tewksbury, who took home the Focal Press/Rafael Jaen Showcase Award for Excellence in Sound Design.

In addition, Abigail Seabrook and Jon Gray, both of Newburyport, were lauded as “a powerhouse pair of actors” by the respondents to their acting exhibition. Seabrook and fellow student Hannah Heckman-McKenna of Salem, N.H. both had an opportunity to audition for the famous Manhattan theater Circle in the Square, while their peer Benjamin Beverage of Lawrence advanced his application process for an internship with Commonwealth Shakespeare Company.

On the faculty side of things, adjunct theater professor Brianne Beatrice — who served as their coach for the duration of the festival — presented her eighth annual Master Meisner Acting Workshop to a crowd of nearly 200 students from around the region. Afterward, she was invited by three separate universities to present a guest theater workshop on their campuses. This follows on the heels of Beatrice’s success last month, when she won an award for her performance in a Gloucester Stage Company production.

Started in 1969 by Roger L. Stevens, the Kennedy Center’s founding chairman, the Kennedy Center American College Theater Festival is a national theater program involving 18,000 students from colleges and universities nationwide, which has served as a catalyst in improving the quality of college theater in the United States. The KCACTF has grown into a network of more than 600 academic institutions throughout the country, where theater departments and student artists showcase their work and receive outside assessment by KCACTF respondents. For more information, visit the official website.

NECC offers an associate degree in liberal arts: theatre option which gives students the opportunity to sample various aspects of theater. Individuals can take courses in acting, directing, improvisation, children’s theater and may earn credits for working on college productions in stage management and technical theater.