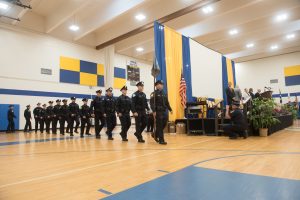 Graduates of the NECC/Methuen Police Academy file into the NECC Sports & Fitness Center.

Of the 46 recruits to graduate from the Northern Essex Community College/Methuen Police Academy on Friday, July 14, during the academy’s fourth commencement ceremony, 40 already have jobs in law enforcement with more than two dozen departments.

Haverhill resident and Northern Essex Community College alumnus Kevin DeCarvalho was one of those recent graduates. The 23-year-old graduated from Northern Essex’s criminal justice program in 2015, before heading off to pursue a bachelor’s in criminal justice at Fitchburg State College. DeCarvalho had no idea he would be back on NECC’s Haverhill campus attending the police academy in just two short years, but the Brazilian native, who is fluent in Portuguese, was sworn in as a Haverhill police officer in December of 2016, and began the 24-week police academy in January.

“It was challenging, but nothing we didn’t expect,” he said of the academy. “After 24 weeks I’m excited to start working as a police officer.” 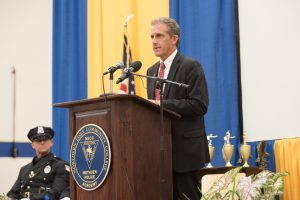 Patrick Fleming, a third generation Methuen police officer, also graduated from the academy. The 26-year-old Fleming, who worked as a reserve police officer for nearly two years, has a full-time position with the Methuen Police Department along with fellow graduate Joshua Waller. Fleming, a 2010 Methuen High School graduate, holds an associate degree in criminal justice from Middlesex Community College.

“I never had any doubts about becoming a police officer,” he said. “I always looked up to my grandfather and father.”

Katelyn Tully of Haverhill, who is following in the footsteps of her dad, a Lawrence police officer, is one of nine U.S. veterans to graduate from this class. She served in the Army National Guard for six years. The 23-year-old is one of five graduates to join the Haverhill police department.

Carlos Aguirre, 34, of North Andover began dreaming about becoming a police officer when he was just a teen at Lawrence High School. After a 12-year career with the Merrimack Valley Regional Transit Authority (MVRTA) he decided to pursue that dream. Bi-lingual in Spanish, Aguirre, whose brother is a Massachusetts state trooper, is one of seven academy graduates to begin field officer training with the Lawrence Police Department. 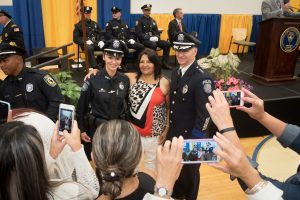 All the graduates completed an intensive 24-week program that covered constitutional law, prevention
and intervention, community policing, domestic violence, elder abuse, victims’ rights, and other topics. All training took place on the Haverhill Campus except for fire arms training and emergency driving techniques which were held at off-campus locations.

The academy opened in February 2015 in response to a shortage of academies in the area. At the time, Haverhill Police Chief Alan DeNaro, said that the Merrimack Valley has needed a regional police academy for over 25 years. “By partnering with NECC, we will be able to move quickly and efficiently train our new recruits as they embark on their chosen profession.”

O’Connor Ives commented that the success of the police academy has been “remarkable”. As a freshman senator she took on the issue of additional money for police training. Additional funding was given, she said, but it’s important to hold the line. She asked those in attendance to contact their elected officials to let them know funding for police training matters.

She congratulated them on their sacrifice, dedication, and commitment to becoming police officers. “Because of you and your commitment, I know we will be safer.”

Lawrence Mayor Daniel Rivera said that being a police officer today is not easy. As officers, he told them, they will be dealing with individuals with mental health issues, opioid issues and homelessness. He closed by quoting selected lines from British Nobel laureate Rudyard Kipling’s “If”…”If you can keep your head when all about you are losing theirs and blaming it on you… If you can talk with crowds and keep your virtue, or walk with kings—nor lose the common touch…”.

Zivkovich offered them a four point challenge – to get involved in their community; to serve with honor; to serve with courage; and to serve with commitment to community, the profession, and themselves. “Don’t ever settle to be good enough…there is no room for mediocrity.” He urges them to keep themselves, physically, morally, and mentally fit.

President Lane Glenn said the success of the academy was a source of great pride for Northern Essex whose mission, in part, is to provide a high quality education. “I hope we provided you with a rich, rewarding academy experience.” On a lighter note, he agreed with Zivkovich regarding remain physically fit and invited them to return to run with the President’s Running Club.

The class president address was given by student officer Juliane Murray of the Tufts University Police Department, who recounted their early days at the academy. She noted that the class was comprised of an eclectic group of student officers including a baker, an ordained pastor, individuals with master’s degrees, and division 1 athletes.

Collectively they lost 275 pounds from their physical fitness training.

She said they are graduating stronger, more knowledgeable, and more confident.

“It’s time for us to go out there and protect and serve,” she said.

The NECC/Methuen Police Academy will enroll its fifth class this fall. Due to its success, the program has grown and the academy now trains Essex County corrections officers as well.

For more information, contact George Moriarty at gmoriarty@necc.mass.edu or 978 556-1224.

Here is the list of the 46 2017 Police Academy Graduates.

Here is a list of the awards given at graduation. 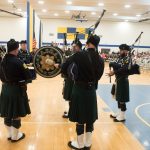 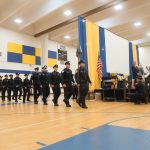 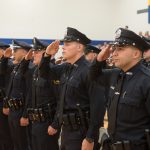 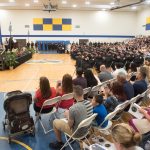 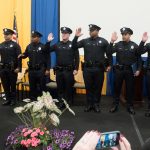 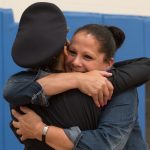 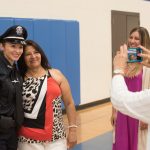 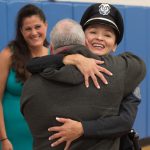 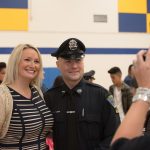 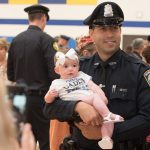 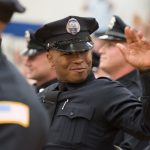 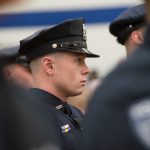 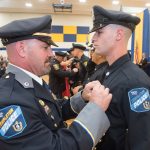 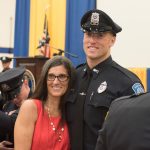 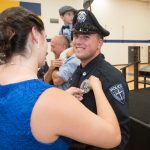 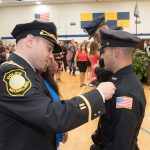 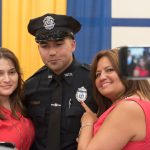 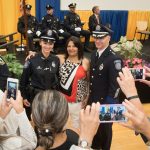 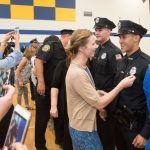 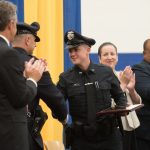 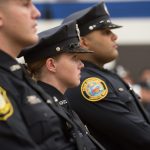