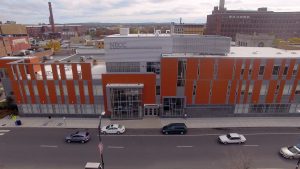 Northern Essex Community College President Lane Glenn visited the Lawrence City Council on Tuesday night to share his vision for the college in the city.

Glenn told councilors that creating more opportunities for Lawrence residents to continue their education is a priority for the college.  “Twelve percent of Lawrence residents have a bachelor’s degree, and we’d like to bring that closer to the state average of 40 percent.”

Increasing the college attainment level of Lawrence residents will help provide individuals with better access to jobs and also will boost the local economy, said Glenn.

One way of accomplishing the increase is by attracting four-year colleges and university partners to the city, shared Glenn.  Currently, Lyndon State College of Vermont and Regis of Weston, MA offer bachelor degree completion programs for Northern Essex graduates in newly renovated space in Northern Essex’s 420 Common St building.  The public is invited to check out the new space—which includes bright classrooms with stunning views of the city and a Mac and PC lab– at a ribbon cutting event on Thursday, Sept. 7 at 11 a.m.  Later this fall, Northern Essex and Cambridge College will sign a new agreement offering discounted tuition to Northern Essex graduates who want to continue their education in the city.

More than 3,000 students are now taking classes on the Lawrence campus, and, at one time, it was the fastest growing campus in Massachusetts, said Glenn.   Two of the college’s largest academic areas—health care which enrolls one third of all students and criminal justice—are located in Lawrence.

As the number of students has increased, the college has expanded to accommodate them.  The Dimitry building, named after the college’s second president, opened in 1991 and since then the campus has grown to include the Louise Haffner Fournier Education Center on Amesbury St, the El-Hefni Allied Health & Technology Center on Common St, 420 Common St., and NECC Riverwalk on Merrimack Street.

The college’s presence also spills over into other parts of the city.  Two years ago, the city received a grant to fix up a derelict alley way between the Essex Street and the college’s El-Hefni building.  That space is now freshly paved, beautifully landscaped, and decorated with colorful murals.  Later this month, the college, the Lawrence Partnership, and the city will launch a fundraising campaign to raise money to purchase a new façade for the Buckley Garage on Amesbury Street.

Anyone with ideas or questions about Northern Essex’s presence in Lawrence is invited to contact President Glenn at lglenn@necc.mass.edu