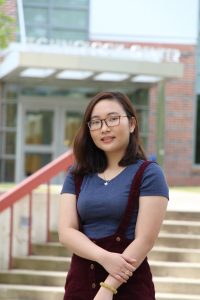 Han Nguyen of Methuen is one of the 200 NECC students to receive an NECC scholarship for the 2017/2018 academic year.

When Han Nguyen first told her family she was trading in the family’s tradition of tailoring to work in a laboratory they were skeptical, but her 4.0 GPA at Northern Essex Community College has since convinced them otherwise.

The Vietnamese native has received two scholarships – the Women of NECC Scholarship in Memory of Ann Bride and the President Emeritus Harold Bentley Memorial Scholarship – for her academic achievements. The liberal arts major is one of 200 NECC students, 32 from Methuen, to share more than $200,000 in scholarship funds raised by Northern Essex’s office of institutional advancement.

“I deeply appreciate the financial support,” said the 19-year-old. “I cannot express enough my sincere gratitude for the support…it truly makes a difference.”

An international student, Han moved to the states at 17 and attended a Christian high school in North Carolina. She moved in with her aunt and grandmother in Methuen over a year ago and enrolled in Northern Essex’s liberal arts degree program with an emphasis on math and science.

After she graduates from NECC in May of 2018 she hopes to pursue a bachelor’s degree in the sciences and eventually work in a lab for a pharmaceutical company.

“I knew by the time I was 15 I did not want to be a tailor,” she said. “I love my parents’ job and love the satisfaction shown in each customer’s face…my father says his job is artistic…I agree with him, but I knew I would never belong to that job.”

It wasn’t until she experienced the modern educational environment in the United States, Nguyen said, that she came to understand her educational pursuits were limitless.

While she understands that friends and family think a career in a laboratory as isolating and boring, she sees it as an important role in the creation of new medicines for the greater community.

In recommending her for a scholarship, NECC Mathematics professor Lori Heymans wrote, “Han was a student in my Calculus I class, and has proven to be exceptional in several respects. Han is very intelligent and diligent. She proves to be a very quick study, learning the concepts of Calculus. Furthermore, her questions are always thoughtful and insightful. Not only was her class participation fantastic, but she has received excellent marks on all of her exams and assignments. Han puts all of her efforts into her projects, and shows every sign of having real talent in mathematics.”

Heymans noted that Nguyen a member of the American Chemical Society, and a top 42 National Finalist for the Team America Rocketry Challenge.

“Han is extremely enthusiastic and she has great aspirations,” she wrote.