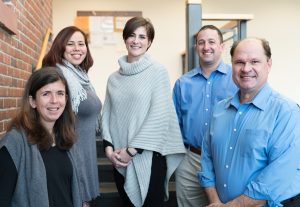 Several new and familiar faculty and staff members were introduced to the Northern Essex community during the spring convocation on Tuesday, January 16, in the Hartleb Technology Center on the Haverhill campus.

In November, Melanie Batista-Ortiz joined the Academic Advising, Articulation & Transfer, Career Planning & Advising Center as an academic advisor. She holds a Bachelor of Arts in Psychology and a Master of Education in Education Administration from UMass Lowell. She is a native of Puerto Rico and is bilingual.

Lauren Forsyth, who has a degree in Library & Information Science from Simmons College, is now the part-time evening research and instruction librarian in the Harold Bentley Library on the Haverhill campus. She holds an undergraduate degree from McGill University in Montreal, Canada.

The newly created Hospitality & Culinary Program has a new coordinator. Andreas Fleckenstein has been appointed to the position. He holds a Bachelor of Science in Restaurant and Hotel Management from Cornell University and A.O.S. in Baking and Pastry Arts from the Culinary Institute of America and a Master of Business Administration from Argosy University. He has worked as an executive chef and a culinary program manager at a variety of colleges and institutes in the United States and overseas.

The Computer Information Sciences (CIS) Department welcomed a familiar face to its team. Kristen Sparrow, who has taught various CIS courses for the last 18 years, is now a full-time assistant professor in CIS. She holds a bachelor’s degree in English from Regis College and is enrolled in a master’s in education, curriculum, and instruction at UMass Lowell. She is a licensed high school English teacher. She spent three years as a corporate computer applications/technical instructor.

Daniel Blair was named Director of Athletics at NECC in the fall of 2017.With plenty of experience in Division II athletics of the NCAA while at Franklin Pierce University, his administration and leadership skills together with his enthusiasm for intercollegiate athletics, are a great asset to the college. He holds a bachelor of science degree from Bridgewater State University and a Master of Science degree in Sport Facility Management from Franklin Pierce University.

A new director of facilities, Paul Miedzionoski, joined the Finance and Administration team in September. He brings with him leadership and organizational skills he honed while working in the industrial and manufacturing facilities environment. He served 13 years in the U.S. Merchant Marines. He holds a Bachelor of Science in Mechanical Engineering from the Maine Maritime Academy and a Master of Business Administration from Endicott College.

She previously worked at the UMass Boston and prior to that UMass Amherst. She holds a Bachelor of Arts in the Classics from the UMass Amherst as well as a Master of Education in Higher Education Administration from Northeastern University.