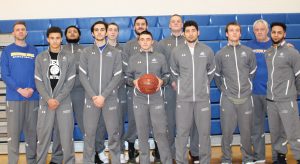 Haverhill, MA (February 21, 2018) – After missing out a year ago, the Northern Essex Community College men’s basketball team is set to make their return to post-season play this weekend. The Knights have earned the fourth seed in the Massachusetts Community College Athletic Conference (MCCAC) tournament with an overall record of 16-11. NECC will take on top seeded Bristol Community College on Saturday afternoon @ 3:30pm on the campus of tournament host Springfield Technical Community College. The winner will advance to Sunday’s championship game at 2:00pm

The Knights and the Bayhawks split there two games in the regular season with each team winning at home. Back on December 7th Bristol grabbed a 102-89 victory while just this past Saturday Northern Essex closed out the regular season by defeating Bristol 102-93.

“We’ve been playing great team basketball down the stretch and I’m excited to see how far this group can go,” commented head coach Joe Tardif.

Northern Essex whose entire roster features first year players has been putting up some impressive numbers that rank both within the region and nationally. Alexis Estrella (Lawrence, MA) currently ranks fourth in region in three point field goal percentage 45.3 percent, that number also ranks him tied 21st nationally. DJ Greenhalgh (Dracut, MA) currently averages 10 rebounds per game which ranks him fifth regionally. As a team the Knights are 14th nationally in scoring offense at 88.7 points per game, which is second regionally. 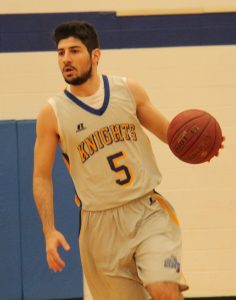 Emir Alagoz of Istanbul,Turkey is averaging double figure points per game for the NECC Knights.

Regardless of this weekend’s outcome the Knights have already secured the fourth seed in next week’s Region XXI Tournament where they will host fifth seeded MassBay at 6:00pm on February 28th at the Sport and Fitness on the Haverhill campus.