Future Teacher will be Honored at State House by Governor Baker 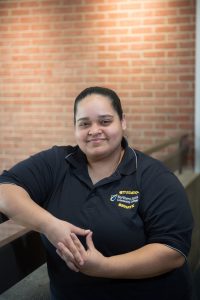 Jinette Galarza, recipient of the “29 Who Shine” Award

Jinette Galarza of Lawrence is a full-time Northern Essex Community College student who works 40-hours a week as a sterile processing technician at Holy Family Hospital and is a campus and community leader.   On Friday, May 4, Governor Charlie Baker will recognize her for her extraordinary accomplishments at a ceremony at the State House.

Galarza has been selected as one of the “29 Who Shine”, an honor which is given to a top graduate from each of the state’s community colleges and public colleges and universities.  Also recognized at the ceremony will be Galarza’s mentor, Sarah Courchesne, chemistry professor.

A liberal arts major, Galarza will graduate with high honors and plans to enroll in the Commonwealth Honors College at UMass Lowell in the fall, majoring in history with a minor in Arabic studies, and then earn her master’s.  Her goal is to be a high school history teacher and teach in her city.  “The necessity is great and there is great potential in our Lawrence youth,” she says.

Originally from Puerto Rico, Galarza, now 32, moved to Lawrence when she was 10 years old.  She attended middle school in the city and went on to graduate from Essex Agricultural School in Danvers.

After high school, she joined the workforce to help support her family which included her mother and her stepfather, who recently passed away.

Galarza is active in her church serving as a youth leader for the past 10 years and participating in seven missionary trips to poverty-stricken areas in Panama, El Salvador, Guatemala, Honduras, China, and Western Sahara. It was through her work as a youth leader that Galarza discovered she had a talent and passion for teaching, and through her missionary trips that she found she loved learning about other cultures. “Community service led me to my calling,” she says.

Most people would find juggling full-time college and full-time work enough of a challenge but not Galarza.  She has served on the Student Senate, as a presidential ambassador, and as a student orientation leader; is campus life editor for the “Observer”, the college’s student newspaper; and recently organized Northern Essex’s first Renaissance Fair, which brought hundreds of people to campus.