A campus leader, Soraghan has been involved with numerous campus organizations, including the Student Government Association, Phi Theta Kappa Honor Society, and the NECC Observer, where he served as news editor. He has also volunteered with local youth baseball leagues, library literacy tutoring programs, and the local affiliate of the Armenian Church Youth Organization of America (ACYOA).

And he’s done it all while tackling a rigorous full-time course load.

In a letter of recommendation, nominator Sarah Tavitian, a fellow student, emphasized this last point as reason for his selection. “He has had to work multiple jobs while being a full-time student and somehow, with all his other responsibilities, has managed to be a shining example of an NECC student,” she writes.

A 2015 graduate of Pinkerton Academy, Soraghan received an associate degree in liberal arts: history with high honors during NECC’s May 19 commencement ceremony.  He will work toward a bachelor’s degree in public policy beginning next year with dreams of one day pursuing a career in immigration law and advocacy. 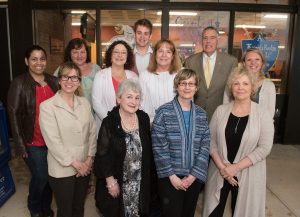 John Soraghan, recipient of the Outstanding Student Award, with the NECC Alumni Board.

The Outstanding Student Award is given each year to a graduating student who has exemplified exceptional commitment to community service initiatives and/or high academic achievement. Recipients must be nominated for the award and selected for approval by the NECC Alumni Board, following a vote.

This year Northern Essex awarded nearly 1,100 associate degrees and certificates to deserving students. The 56th annual commencement was held on the Haverhill campus.